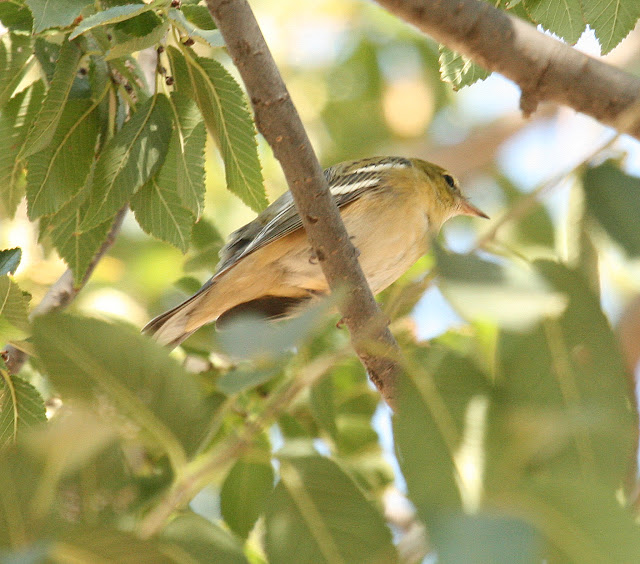 At Gage Hotel. It was/is often in the Mexican Elder that is behind the restaurant. Near this tree is also a fountain and organic tomatoes and dill.

It also spends time in the large elm in front of the restaurant patio
**NOTE: This male is, ofcourse, in non-breeding plumage and likely a young of the year.

On the state list-serv, TEX-BIRDS:

"Matt called me this morning to let me know about a BAY-BREASTED WARBLER at the Gage Hotel; my brief attempt was fruitless on my way into town, but this afternoon he had two more sightings of it for a total of 20 minutes with bins. It's a nonbreeding adult male; notes taken, no photos yet. This is a great fall record!

It's frequenting a Mexican Elder tree behind the restaurant/bar at the Gage Hotel. Hopefully it'll stick around until this next front moves through on Thursday! 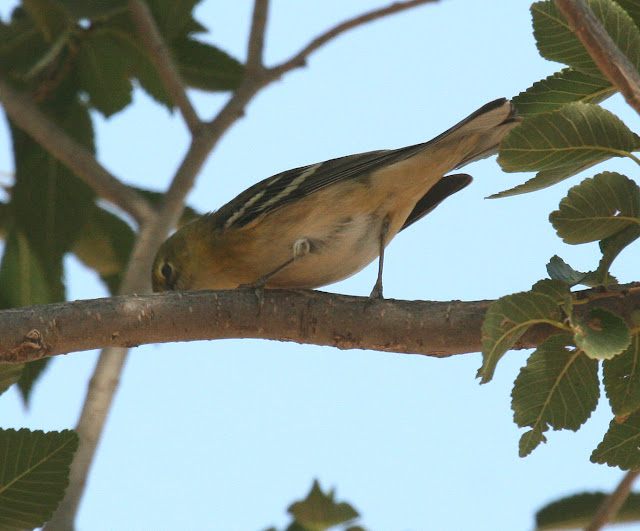 New: Marathon: Bay-breasted Warbler -- first sighting: Oct 25On the morning of Oct 25 Matthew York found a Bay-breasted Warbler (nonbreeding adult male) at the Gage Hotel in Marathon. He relocated the bird in the afternoon for 2 more sightings (last one at 4:25pm). The bird was frequenting a Mexican elder tree behind the restaurant/bar at the hotel. The address of the hotel is 102 NW 1st St - US Hwy 90 West."


So, for more information about Bay-breasted Warbler (Dendroica castanea) here are some links: 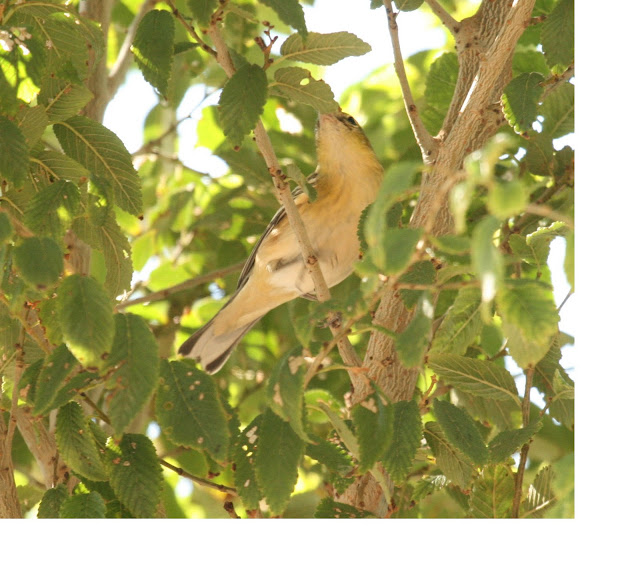 The following is a range map:

Check out the legend on the map.

The bird checklist I mostly use for the trans-Pecos region is Birds of the Trans-Pecos. a field checklist. Texas Parks and Wildlife. authored by Kelly B. Bryan, 2002.

It lists Bay-Breasted Warbler occurance only as "Accidental" in the months of April and May.

"Accidental" = "generally one to three records region-wide each decade."

Looking back at that range map, I can't help but wonder, "How far north did it spend the summer?"

I hope it's there tomorrow. Cold front blowing through on Thursday might help motivate it to continue on down to South America. 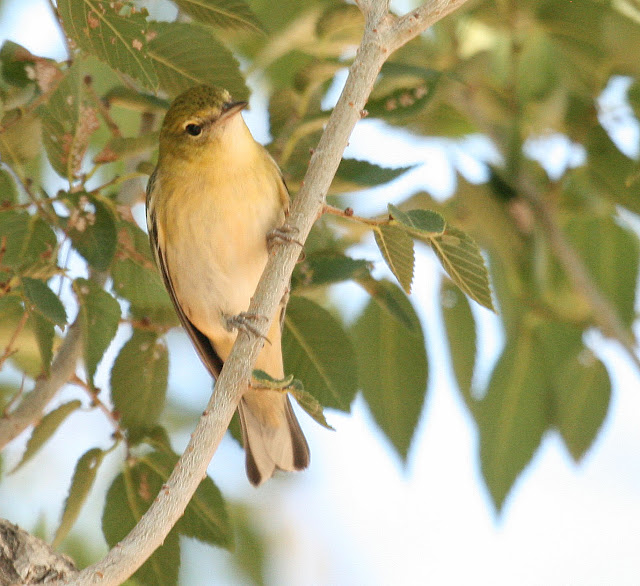 **As of 6 November 2011, the Bay-breasted Warbler is still here. It is often seen at the huge elm out front, between the historical building and the restaurant. **
Posted by MWYork No comments:

This entry is backdated; photos are from Oct. 21, 2011 at the Warnock Science Building garden on the Sul Ross State University Campus. Check out the buggide.net page for more life history and pictures of adult Falcon Sphinx moths... but until then... 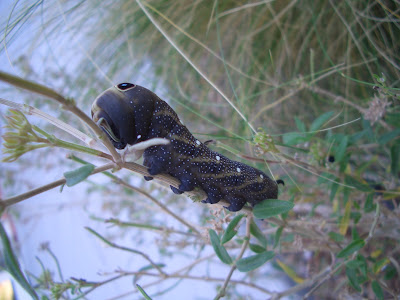 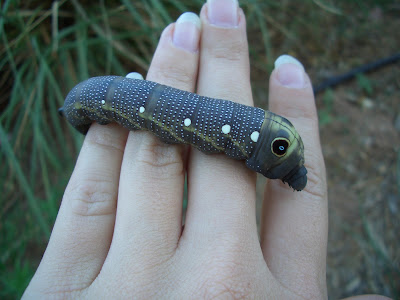 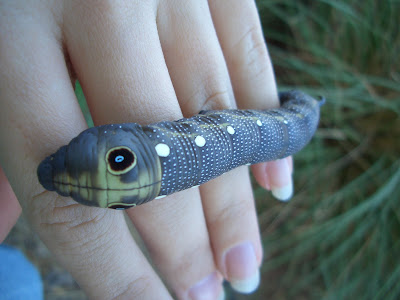 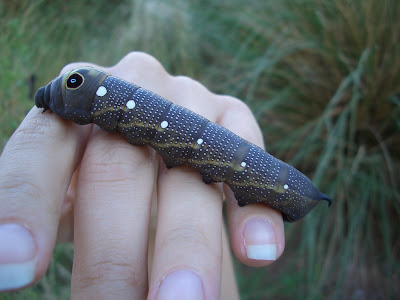 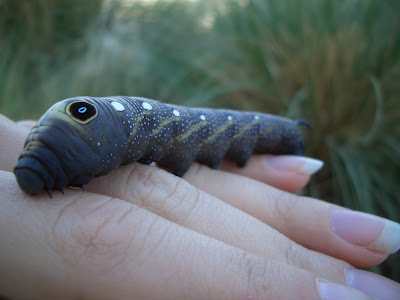 From Oct. 6th at the Gage Gardens - a few of thousands!

Posted by heidi No comments:

It has now been several days since a noteable decrescendo in the fantastic Monarch (Danaus plexippus) migration flight numbers and roost sites. This beautiful biology took place for atleast a solid three weeks. Folks who are generations-Marathon residents never remember anything like it. We are usually well west of this bi-annual occurance.

Posted by MWYork No comments:

From November 9th until the 13th, the Rio Grande Valley Birding Festival in Harlingen, Texas, will be hopping with birders, birds and... us? It's short notice, yes, but all day on the 11th, 12th and 13th, you'll find us tucked away at a booth somewhere - trade show details here. The trade show is free to attend and open to the public, so it'll be a great chance for any of our south Texas readers to pop in and say hi! We'll be representing the Gage Hotel, but more appropriately, we'll be promoting the Gage Gardens.

Another random perk for attendees: y'all will get to see our shiny new business card! We'll be keeping the horned lizard business card, but also introducing a new picture (and updated contact information, which would be helpful). 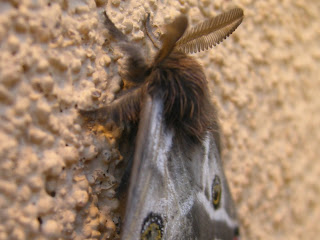 This species is a favorite of ours in the area. 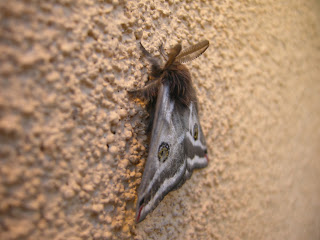 This is a link to a post on them, this time, last year.


Here is a link to talk of this species' hostplant and pupae here in the Marathon Basin. 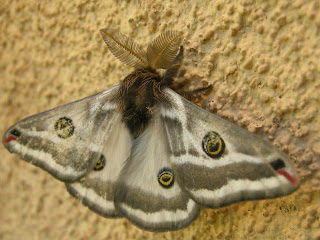 Posted by MWYork No comments:

In just over one hour, an easy perusal of Post Park turned up a few "first of season" birds, including Red-naped Sapsucker, Green-tailed Towhee, Eastern Phoebe and an occasional visitor to the park, Rock Wren.

It has been almost a year since we last recorded Black Phoebe at the park; it's usually a guaranteed spot for them but we are concerned that the freeze and drought may have pushed them out for a while.

Welcome to the online version of Marathon's First Annual Winter Sparrow Workshop! Officially it covers Highway 90 from Marathon to Alpine and misses a few winter species but does include fall species, so perhaps it's more accurately a north Brewster County Fall Migration Sparrow Workshop.

This week has been a busy one for roadkill, unfortunately, with plenty of contributions being fresh off our own hood/windshield. Oof. So to make the most of killing three birds with one vehicle (in as many days), we bring you a collection of reasonably identifiable roadkill. Thanks to several other vehicles for their contributions... 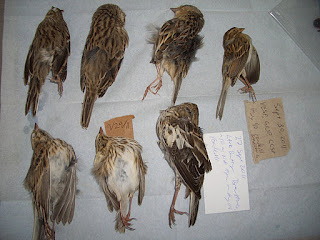 To focus on what's passing through these days, we'll focus primarily on Vesper, Grasshopper and Clay-colored Sparrow. While Lark Buntings are starting to show up in good numbers, they are quite distinctive with their huge white wing patch, large size, black tails and distinct flocks. Savannah should also be included, but it froze in an impractical position (excuses, excuses). 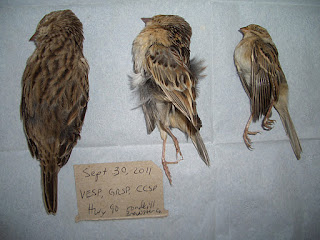 Size in the field looks rather different than size in the hand. Only the Clay-colored, of these three, really jumps out as being much, MUCH smaller in the field. They can look frustratingly similar to young Chipping Sparrows and Brewer's Sparrows (for a good bit of Brewer's v. Clay-colored discussion, check out Lauren's post). 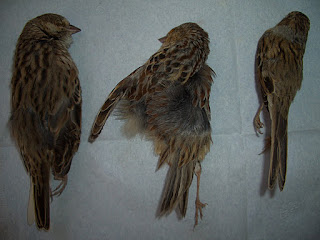 Back patterning varies from thick, heavy streaking to drop-shaped markings or fine streaking. The back of the neck/nape is distinctly a clean gray on Clay-colored and the tail is also much longer, proportionately, than on the other sparrows (except, of course, Brewer's and Chipping). 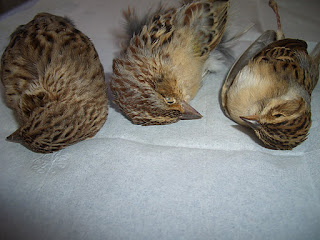 Crown streaking! Everybody's favorite... or not. Vesper has no central crown stripe to speak of, Grasshopper has a nice pale, buffy one, and Clay-colored has a rather indistinct one (and sometimes mostly absent). 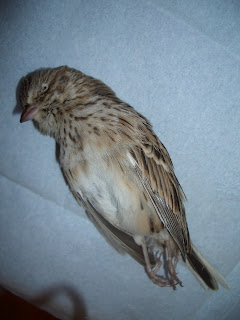 Vesper is the only one of this batch that has a streaky chin/throat (Savannah also shows streaking down the breast as well but lacks the tail markings), and it's also the only one of our winter sparrows that has crisp, white outer tail feathers. This is one of the best visual hints when they flush from the roadsides - Lark Sparrow does have white outer tail feathers, but the white edges in towards the center of their distinctly rounded tail. Vesper's tail will appear quite flat across the bottom in comparison. 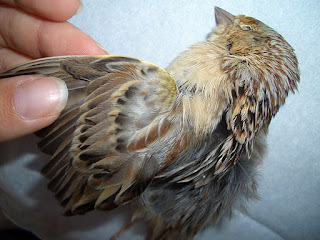 The Grasshopper Sparrow, above, shows warm, buffy tones on its face and a nice splash of golden yellow on the shoulder. The slightly orange face gradually blends into a streaky gray and rufous crown. The call note is a fantastic light buzz. The full size photo barely does the subtle colors justice, they really look wonderful in natural light.

Maybe one of these days we'll have another batch of comparison photos - for now I hope this crash course in sparrows has been interesting, if not terribly photogenic!

As always, we promote picking up roadkill, window-kills and otherwise intact dead birds in the name of science: state and federal permits are required to do so, however, so please contact educational institutions or people who have permits to find out how you can help. Our permits are through Texas A&M University and all of our specimens go to the Texas Wildlife Cooperative Collection unless permission is given for certain specimens to go to the collection at Sul Ross State University.
Posted by heidi No comments: