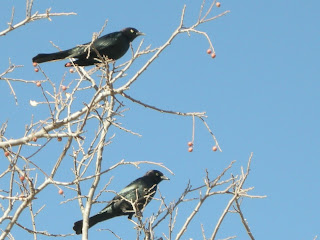 The "blackbirds" seem to know it.

Winter resident birds in Family: Icteridae, that is "blackbirds" and allies, often "stage" in progressively larger numbers as their time to migrate looms. Other family members, like the orioles will arrive in their stead. 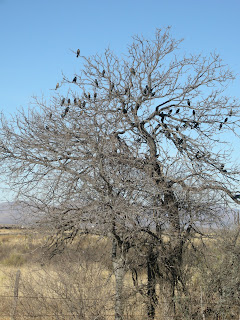 Here in the Marathon Basin we begin to see flock numbers increase of Brewer's Blackbirds (Euphagus cyanocephalus) as well as the mix of Brown-headed Cowbirds (Molothrus ater), seen below.

Some of the cowbirds are year-round residents of the trans-Pecos. Many of them, however, will fly north to the central and northern lalatitudes of the continent for Summer. Bronzed Cowbirds (Molothrus aeneus) will arrive soon enough. We already saw one juvenile bird in late January. 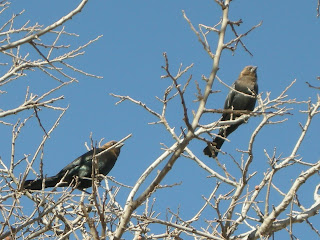 Another species noticeably conglomerating in larger and larger flocks are Lark Buntings (Calomospiza melanocorys). Several of the Lark Buntings are beginning to show the starts of breeding plumage.

We've even had a couple of butterfly species as well. Soon enough, black-lighting for moths (*more on that later*), traipsing for butterflies, other insects and arthropods will begin.

Texas has put in one memorable and miserably cold and windy winter. At first, 40 degrees and sunshine never felt and looked so good.