Sightings around the region

Since we're heading to the Rio Grande Valley Birding Festival as of 4:30 am, we thought the site could use some distractions in our absence. A few reports have been trickling in from around the region, so here's a batch from Jeff Davis Co.

Posted with permission from Kelly Bryan -

FYI, Marc and Maryann photographed four Evening Grosbeaks at their feeders in the Davis Mountains on October 28. They only stayed a couple of days. Also, a female visited a feeder here in Fort Davis for at least two days this past weekend. For those planning to visit west Texas in the next couple of months keep you eyes pealed. Hopefully, there are more coming down the pike. There appears to be a large influx of Red Crossbills and Western Scrub-Jays are pushing out of the mountains and foothills into the lower desert. May be a good winter overall out here. KBB


And from the Christmas Mountains Oasis in south Brewster Co, where the Varied Thrush continues, also via Kelly Bryan -

Once again the Christmas Mountains Oasis in south central Brewster County has produced an outstanding bird for Texas. If you have never been there then you do not know and cannot appreciate the amount of work it took over the past 20 years or so for Carolyn Ohl to produce the "habitat" there.

I made my weekly stop there this morning to sample her hummingbirds as part of my overall banding study here in west Texas. The first bird in the trap this morning was a male Costa's Hummingbird. He had completed his flight feather molt and was in the process of completing his body molt including his head, gorget and crown. Carolyn will provide an update on this bird on her website and/or on Texbirds later today including the status of the Varied Thrush there. She will have some pics posted to cmoasis.blogspot.com later today.

Save for one juvenile male that we likely banded last week because it was trap shy, there was a complete turnover of hummingbirds there today from last week. We caught four Anna's Hummingbirds including two new birds and two returns. One adult female was previously banded on 12/12/11 (our last Anna's banded last year) and the other, also a female, was banded as an adult on 11/13/09 at CMO. KBB


(The Costa's was at the feeders all afternoon at CMO after it was banded.) 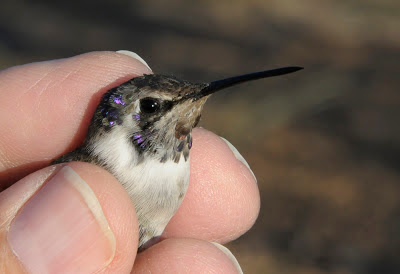 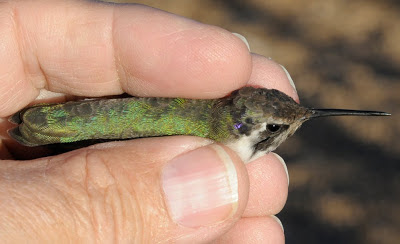 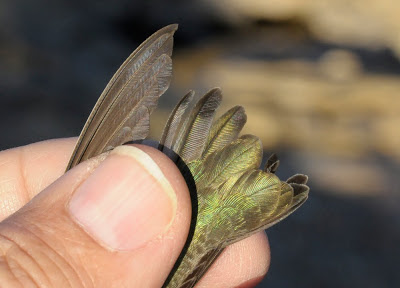