The "why" of window monitoring

Birds hit windows. It's pretty much impossible to overstate the  extent of the issue. Pretty much everyone knows that it happens but very few people look beyond face value of the smudge on glass.

This is more eloquent than anything I've seen yet, so please take a look at
Tim O'Connell's piece: A window into the perils of migration. He beautifully outlines the "how" and "why" of dead birds as educational tools, as well as one example of the mind boggling architecture that causes such high mortality rates. Flat-sided buildings are bad enough, but a horseshoe with a 'corridor effect' cluster at one end? Yikes!

On a coincidental note, I'm about half way into a paper on the complexities of North American window collisions - they've been my constant companion since 2003 and I need to get my thoughts out of my head and into writing. Unfortunately it's a rather dry, sciency sort of writing, but I think the discussion will be helpful. It's just terribly difficult to keep citations sorted out since there are about 20 papers that cite each other ad infinitum and the resulting citation loop is frustrating. One paper that I criticize lists my paper in its citations, too, for that matter!

Anyway, here are some lovelies - Tennessee Warblers - from Principia, circa 2004-2005 (a tiny fraction of the actual species diversity and even fewer of the overall body count.) 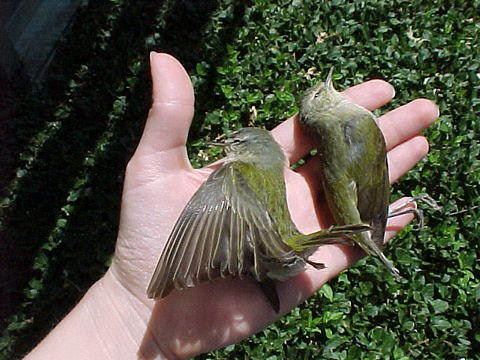 This is also cross-posted over at SeeTrail.
Posted by See Trail