Until Tripp is able to post further details, this is the only shot we have at the moment of an all-dark gull with pale rump at Lake Balmorhea on Saturday, October 27. 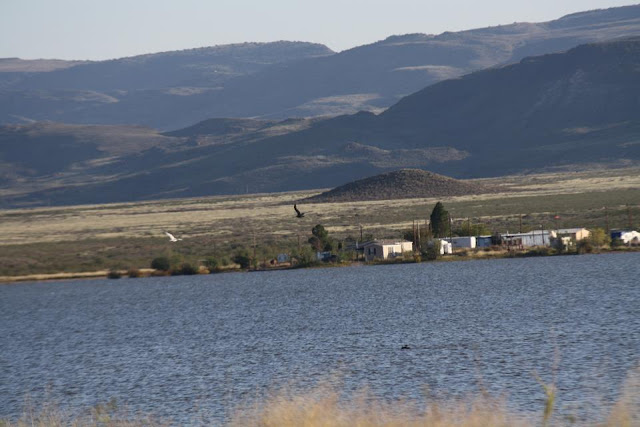 The bird on the left is a Ring-billed Gull, and the dark bird was described as slightly larger and loosely associating with them. So far it sounds like a fairly good fit for a Heermann's Gull.

Edit: as of 2 pm on Sunday, October 28, that particular dark gull (Herring/CA type) was not refound in spite of three people searching. Two sub-adult Herring Gulls, one darker than the other, were present but very un-Heermann's like. That said, I was cooped up at work, so the following list is via Cameron Carver -

**Edit by MWYork:  NO ALL DARK GULL present during our obs. Three people gave it a heck of an effort.  HOWEVER, an excellent consolation prize was the later-in-the-day presence of a 1st winter SURF SCOTER.**