This is the segment in which we are glad that there's no 'scratch-and-sniff' feature on the internet. Dead fish, live fish, and digested fish are our themes for today.

Our biggest challenge in tending the Mergus was finding REAL fish. Scales and bones are hard to find in the canned food aisle, and in even shorter supply in the dog food and fish oil diet. A day of rest and a few days of kibble puree is probably enough to make any respectable fish-eater swear off of non-fish... but this happened to be right before Christmas in a little desert town where no bait shops existed within a three hour drive. There are two saints in this story, and they're not us. One sent a donation to offset expenses, the other showed up with a giant cooler of WHOLE FISH, a small tank of goldfish (training fish, we hoped), PILES of paper towels, and a heart of gold. And came from half way across the state to bring us these fishy gifts.


Coordination continued to improve, floating became basically level, foot action was strong. Dabbling became more frequent, as did the 'rearing up' - of course, no attention at all was paid to any of the dead fish in the tub. Float time was consistently after meal time, however, so that may explain some of it.

Giant, smelly, interesting poop (honestly, I thought we had a poop tag for this blog, but apparently we do not - unfortunate, really, we should remedy that). Kibble poops were uneventful until they began to smell like ammonia, at which point we tripled the amount of food per meal; but even 15 ml of slurry is feeble compared to one juicy finger mullet. The struggle to get 3 servings of sludge down a throat is just not as serene as the easy, slick, head-first slip of the fish... almost like the bird and fish are made for each other... 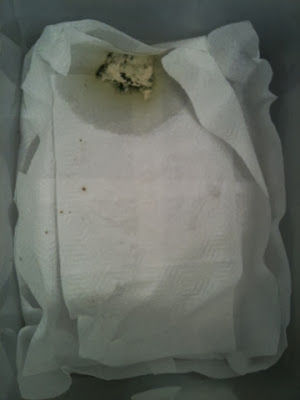 I have no idea why the photo below looks so... frosty? Sticky? Weird - it just looks dark and wet until it's on the big screen. Eyes closed, resting after a VERY splashy adventure... we'll call that progress. 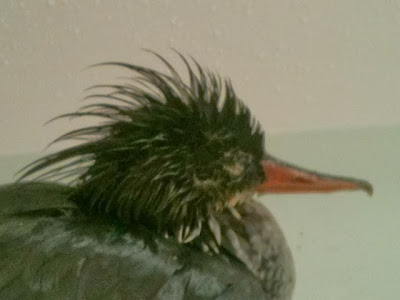