Our occasional updates have been a bit slow lately, so here's our personal update in a nutshell: Christmas Bird Counts, having family in town, playing with plants and generally working hard. Also fighting the battle to get out of bed on ten degree mornings. Thankfully, that cold snap has ended!

Otherwise I was hoping to indulge in a timely Q&A session. This is part of an e-mail that we received recently from a friend who was returning from a birding trip to the Rio Grande Valley and was curious about the status of Aplomado Falcons out here:

I know that you & Matt released some young falcons and after reading through your blog, I was wondering if any have been sighted recently in your area or have any of your banded falcons been spotted elsewhere? I am curious about the success rate of the releases - do you know how many times the falcons have been released in your area?
-L.B.

While my first Aplomado Falcon was seen on the illustrious "road to the Brownsville dump," some people have been lucky enough to see them in/around Brewster County. But luck does seem to be the most appropriate word for it. The Peregrine Fund has been working on Aplomado Falcon restoration/reintroduction in west Texas for about 15 years. In that time, the south Texas population has done remarkably well. Out here? Not so much.

...that's it for us, other than one late September sighting that was also of a bird in flight (while driving 75 mph) a few miles west of Marathon. A local birder reported one in late December near Black Gap Wildlife Management Area. Certainly, there were single-digit sightings from Highway 90 during the release (C2 being the individual when we were able to read the band), but for the most part it's a challenge to find the proverbial needle in a haystack. 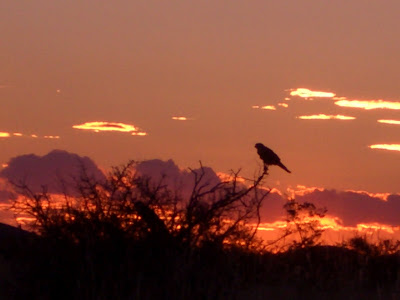 For seekers of Aplomado Falcons, the challenge is this: few falcons, restricted land access. By contrast, Old Port Isabel Road (NE Brownsville) is the hub of Texas breeding activity for the birds; there were 8 nesting pairs at last count (per Brian Mutch, of The Peregrine Fund).

For Aplomado Falcons, the challenge out here is multifaceted and not entirely well understood. The Peregrine Fund intends to further research the west Texas populations in the coming years to investigate why that may be - Great Horned Owls are the primary threat to young falcons during the release process (Matagorda Island and other owl-less islands have remarkably high success rates), but they are not the determining factor in older birds. As with most species, mortality rates are quite high in the first year, quite a bit lower in the second, and nearly negligible beyond the third year of life.

To appreciate the nomadic tendency that Aplomados exhibit, consider this: when 'hack' sites were within 50 miles of each other, birds from both sites would show up to feed at each. Sierra Blanca, Valentine and Marathon have been areas with recent releases - they're far enough apart that the birds won't get mixed up at different sites. [To my understanding, this is simply to cut down on observer errors due to similar band numbers.]

So to address each question simply:
Q: Have any have Aplomado Falcons been sighted here recently?
A: Yes. But they are few and far between

Q: Have any of your banded falcons been spotted elsewhere?
A: Not yet that we know of; always hoping!

Q: What is the success rate of the releases?
A: Lower than hoped for the region - of 19 birds we released, 9 made it to the "61 day" mark, but 8 were pretty much predated upon release (this seems to be the general consensus). This is about average, it seems, but averages don't usually include immediate predation - 'our' site will likely not be used again due to the predation issue.

Q: Do you know how many times the falcons have been released in your area?
A: Not exactly. The site we worked had been used for releases at least 3 or 4 times in the preceding 10 years. There are generally at least two release sites in west Texas each year (for reference, our location was the eastern-most of the western sites and our late-season crew supervisors were based in Deming, NM) and each location ends up with 10-20 birds to be released.

Thanks for bearing with me for a super-long post! Feel free to post more questions in the post comments and we'll do our best to answer them - or elaborate more on topics already mentioned.

Email ThisBlogThis!Share to TwitterShare to FacebookShare to Pinterest
Labels: biology, birds, Brewster County, Q and A