As Heidi and I were leaving the property early afternoon yesterday we spotted a somewhat different blackbird. Most notably with a larger, flatter head and a somewhat larger bill.

No red eye; so without that characteristic along with a bit of a scaly feather appearance this bird was concluded as a juvenile.

When birds are early to a seasonal location or are found far away from their normal range, often they are young birds.

Didn't you think you knew everything when younger?

Many more of its species will arrive in the spring and reside for the summer in the trans-Pecos and Marathon Basin. They'll be here demonstrating that no youth knows everything. It's not spring yet, brother. It found that out quickly, last night. And will tonight as well. 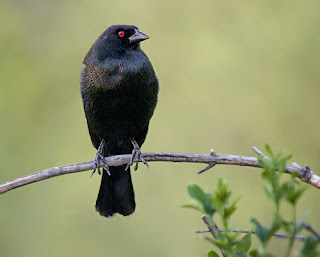 This bird was foraging on the south side of the property (out of those crazy 30+mph North winds) foraging with at least one Brown-headed Cowbird and a few winter residing Brewer's Blackbirds.

Author's note: Today, it was seen in the afternoon north of the pond on motel grounds. It was foraging with Brewer's Blackbirds, a couple of Brown-headed Cowbirds, a couple of meadowlarks, and a single Lark Bunting.

It was an Icteridae family party, plus the Lark Bunting party crasher.
Posted by MWYork