I managed to make it out of the house with neither point-and-shoot nor 'real' camera with me, couldn't find a notebook so an envelope had to do... cell battery was half gone and the park was full of people and an off-leash dog. All things considered, six birders from Houston took it in stride and still managed to find some goodies. Butterflies for the day included most of the usual suspects (Monarch, Queen, Red Admiral, Checkered White, Variegated Fritillary) and First of Season American Lady as well as West Coast Lady. The latter two were puddling upstream of the fence in what was left of some vegetation after some feral hogs left their mark.

First of season Desert Ironclad Beetle also made an appearance - they are wrinkly looking creatures that tend to startle into a faux death pose fairly easily.

To make up for lack of photos from today, here are some relevant bits from a our other blog, SeeTrail, about desert ironclad beetles. (2010) 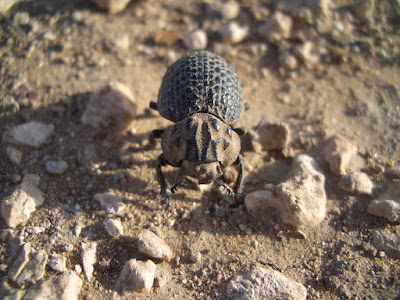 
After Post, I headed a few miles west to the Hwy 90 tank: