Just look closely. Very closely. It's quite the bug, no? Now who said they didn't like moths?

The fuzzy antennae are all the better for smelling pheromones with, generally a good indication that the critter is male. Apparently the common name - you'd never guess by the scientific name - is Bicolored Chloraspilates. Thanks, BugGuide. At least we can now pronounce KLOOR-is-pil-AYTS BYE-col-er-AIR-ee-ah.

Life cycle is apparently unknown for this gem who visits our lights on a regular basis. So much to learn in the world of moths! 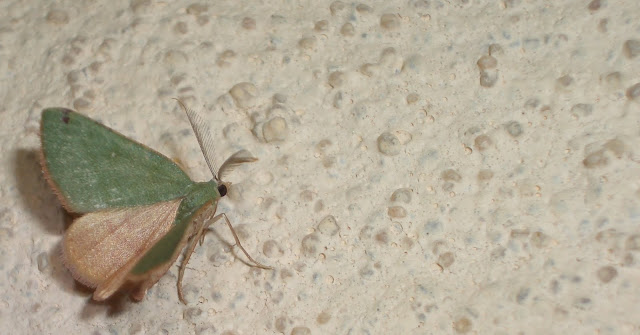 These little neighbors of ours are a bit larger than a penny and tend to be regulars on the north wall when we blacklight, though we rarely exceed singles or pairs of them on any given night. We've never had double-digits of them, for sure. This individual was photographed in the presence of Jane and John Balaban on 25 April 2012, along with approximately half a gazillion other moths in attendance the following night. But more on those moths later.
Posted by heidi