The post below has met an unusual, if not unpredictable solution. It was posted on August 5th over on SeeTrail because it's quite informal and, well, we had no idea what the outcome of the dilemma would be. Spoiler, of course, is at the end.

Friends on facebook who have been following this adventure know that it started with an update:

BEST HUBBY EVER!! Brought me a Texas Rat Snake =D Yes, Sky, it is has been taken into custody until further notice. My sewing tote will need to be laundered after this, though.

...Sky Stevens was tagged in the note because last time the snake - this snake? - was found and identified, there was a bit of hesitance on the actual identification. Texas Rat Snakes (Pantherophis obsoletus lindheimeri) aren't supposed to be here. And they're certainly not supposed to be startling guests around town; that's how they get killed. And we don't want that to happen. They are NOT venomous and they eat House Sparrows among other things, what's not to love?

So Friday morning, when a handsome fellow showed up while I was at work and presented me with a lovely Texas Rat Snake, I was thrilled. It was alive, well fed (check out the lump in its belly!), gorgeous and definitely 100% Texas Rat Snake. 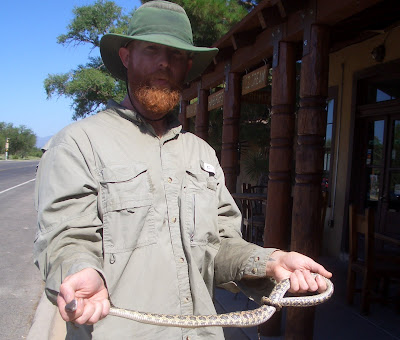 Snapping a few photos, the question soon became: how to keep it until 1) ID is confirmed by someone else, 2) it can be released where it won't return, since returning means eventual death, 3) ???

Not working at a pet store is kind of a down side - we end up with enough birds going to rehab that we probably should have some empty cages around. But while rehab birds can - and should - go into dark cardboard boxes lined with paper towels, well, that sounds like a recipe for escape with a snake. Canvas tote bag, it is! Sewing projects don't need a tote anyway. 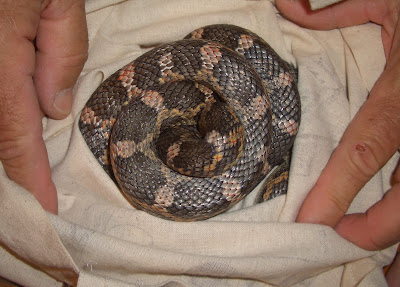 Back to the snake - if it's the same individual that was found a few months ago and released a few blocks from the location... it's still healthy, bright eyed and well fed. Meal favorites are suspected to be House Sparrows, since it was caught among their nests last time.

A few less-than-flattering portraits of the lovely critter, held gently but firmly by Matt: 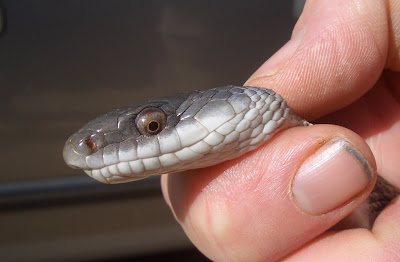 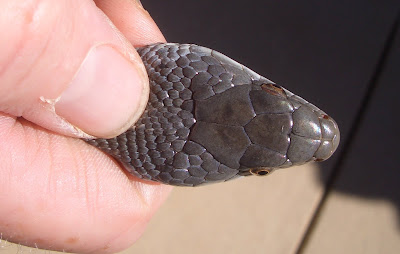 The patterning is really quite something when the photo is enlarged - most of the scales are edged in a bright, bold orange-red color! This photo also highlights the less-mouthy and more-stinky end of the snake... you can see where the ventral (belly) scales go from being double to single; and the cloaca is right where that transition occurs. 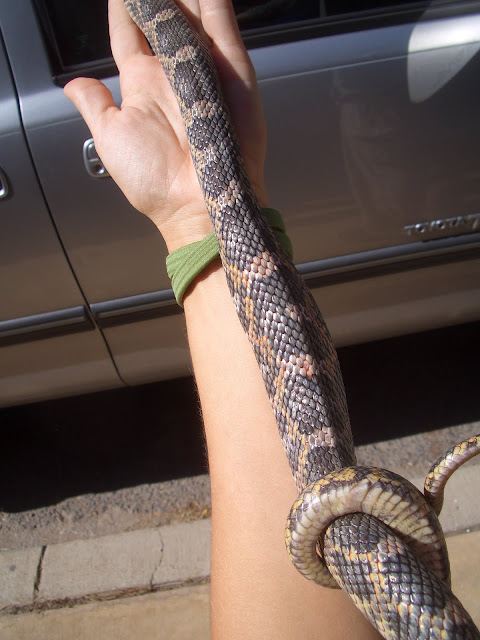 To keep the discussion brief: these snakes don't belong here. They like to climb trees and eat baby birds... heat and humidity are part of their lifestyle. We're just not in their range. But shipments of plants, trailers of supplies, plenty of trucks and trailers and room for stowaways... most of the traffic out here comes from the direction of Dallas, Austin and/or San Antonio. Prime habitat, really.

The blue stripes are Baird's Rat Snake (Pantherophis bairdi) - most of Texas is shaded brown, where Texas Rat Snake is supposed to be found. We're also in the range of the Trans-Pecos Rat Snake (Bogertophis subocularis), but that's another story entirely.

Back to the quandry -
Texas Rat Snake of full-tummy has been upgraded from canvas tote bag to spacious tupperware digs; lovely cavern of overturned dog bowl and deer antler for ambiance. Spinach tub, trimmed down for a pool... filled with roof-caught rainwater. This whole featherless-bird housing issue is strange.

Well, now what? We have neighbors who occasionally head to San Antonio who could release it - but how good are the odds of survival? Better than a bird's would be, I have to assume. If released around here, eventually it will probably be killed by a person. Even if suitable enough habitat - like Post Park - could work, it stands a chance of interbreeding with locals and we have friends doing DNA work on snakes out here that would not be thrilled. A captive life would be cushy but... we like things to be living as naturally as possible. Does it have mites/ticks/other things that it could transmit to other populations? It is already here and probably still has whatever it came with - but is that a big issue with reptiles?

These are the things we are musing over. For now, a large plastic tub on our porch has a fat, healthy Texas Rat Snake as a guest. And it's a safe place until further notice.


Approximately two days later, the tupperware was empty. They are escape artists, after all. Our porch is full of holes from the June hail storm, so the assumption is that it's out. Right? At the end of August, however, a rather distinctively sized, shaped, marked, perfectly intact snake shed was found in the corner of our porch. So... it's out. Right? Maybe? Coming and going as it sees fit? We'll at least hope so. Because there's probably not much, if anything, on the porch for it to eat. And the only two mice in the house went to the peanut-butter covered popcorn in the sky via snap trap.
Posted by heidi