Edit: The Balloons Blow facebook group has been in contact with the organizers since MARCH trying to prevent this release. - We've been in contact with the organizer since March when his original plan was to set a balloon release world record. Many people have joined in the fight to convince them not to go through with this mass littering event. Check out our Thursday post :) http://www.facebook.com/BalloonsBlow/posts/100689140086951

Bear with me. The Big Bend Region is having air quality problems and the particulates originated in places like... Houston. That's a 10 hour drive from here, if traffic is light.

Our region is impacted by people who have never been here, many of whom will never come here, and plenty of whom don't know that Texas has mountains. It's the issue of impacts not being seen by those causing the problems.

Yesterday I was made aware of a hot air balloon festival in Van Wert, Ohio. I looove hot air balloons - growing up 1/2 a mile from Johnson Space Center in Houston (NASA!), I saw the Balloonar Festival every fall. Seeing huge, quiet puffs of shoes, batteries, animals... just drifting... it awakens the inner nerd. But I'd never associated hot air balloons with a helium balloon release - it made no sense to me and I was confused why there'd be an outcry over actual hot air balloons.

Upon further investigation, the helium balloon release was part of a kids raffle. But it's disturbing because this is based on the expectation that released balloons will travel a good distance - one Ohioan posted on the event's facebook page (prior to 99% of the comments being removed) that they found balloon remains from a release 30 miles away. Emphasis below is mine - they are obviously aware that the balloons won't stick around. But they don't seem to take into account that these balloons are simply event sanctioned pollution.


The balloons will travel varied distances from Van Wert and eventually descend back to the earth. It is hoped that someone in that location finds the tagged balloon and reports it’s location and number as instructed on the tag. Whichever balloon is verified to be the one that traveled the greatest distance, both the finder and the launcher will win a new flat screen TV as indicated on the balloon tag!

The contest will remain open for thirty days to allow for travel time and sufficient time for the finder to call in the claim.


As of the time of this post, the release will have already happened if they didn't cancel it at the last minute. (EDIT: Seems to have been called off "strictly" due to weather reasons. See very end of post!)

Below are screen shots of the page if they change it later - I wish I'd taken screen shots of the HUNDREDS of comments on the event's facebook page before commenting was closed, reccomendations were closed, messaging was disabled and they shut down all feedback. Several were along the lines of "I thought the kids balloon release sounded whimsical and was going to let my kids participate, but these folks actually make a really good point."  --- all removed. Gone were helpful suggestions of "send the balloons home with the kids and do a raffle" ...gone were the very eloquent pleas from Ohio's own Black Swamp Bird Observatory matriarch, Kimberly Kaufman. Gone were the poignant insights of Julie Zickefoose - Ohio author, naturalist and common sense proponant. Gone were the "better PR will result from alternate plans" tips of the First Lady of the American Birding Association, Liz Gordon.

Admittedly, many folks posted the same photo of a tangled dead murre (image above) over and over, which is kind of gross and I'm not keen on that... festival organizers at one point posted a link to a biodegradable latex balloon link that really didn't slow things down at all - for the balloons to work as advertised, they'd need several months to break down, as well as being hand-tied with no string. Not to mention a lack of 1,000 tags... I won't even get into why a 4 y/o releasing a balloon needs a flat screen TV, because that's another rant for another day. But I think every person who picks up a balloon from the release deserves a medal for removing the aerial garbage.

...below the helium balloon release is the screenshot of contacts for the festival proper. 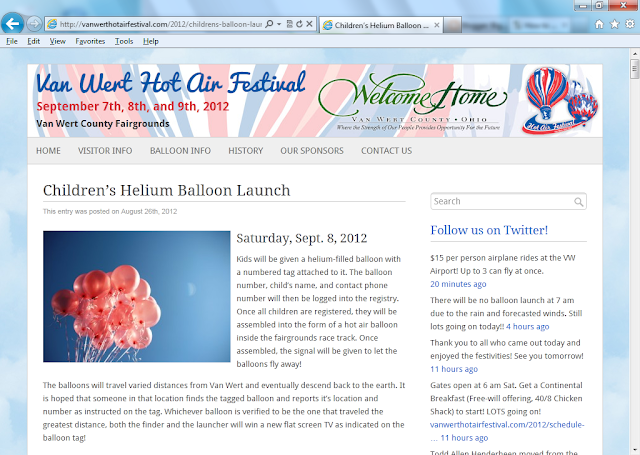 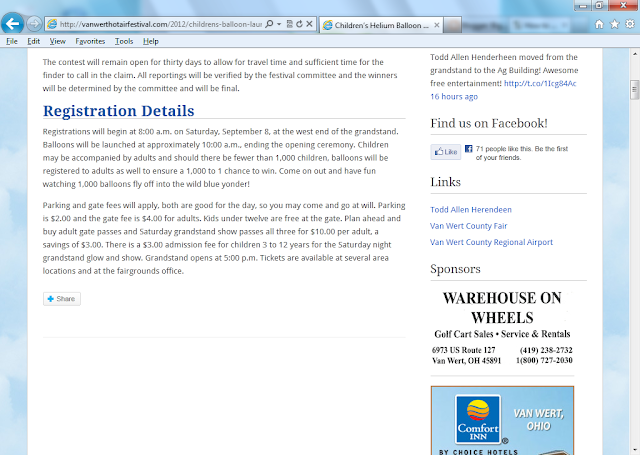 The folks below are the direct contacts for the festival. PLEASE be thoughtful, tactful, friendly and helpful in your contacting of these folks - I seriously doubt the balloon meister, weather and web folks have anything to do with the actual balloon release (also, the web guru has threatened legal action if contacted for anything unrelated to the webpage). 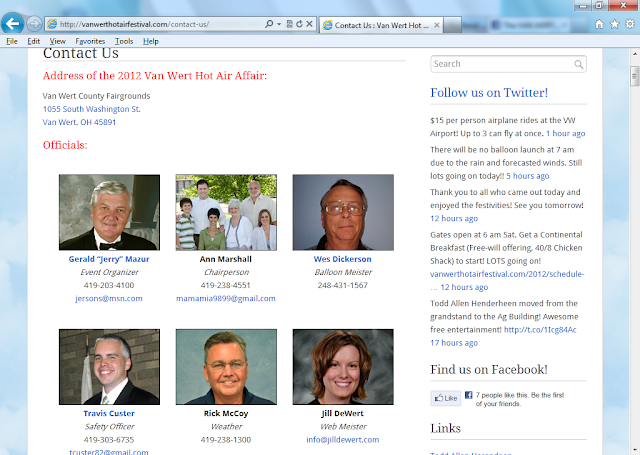 It's like a rubber duck race in which the ducks are filled with a declining and important element and have long strings attached but nobody is going to bother retrieving them at the end of the race.

Helium links to be added ASAP as well.
Who needs MRI scans when you could have a squeaky voice and floating balloon instead?
Helium stocks run low - party balloons to blame
Why is there a Helium shortage?


HELIUM BALLOON RELEASE REPORTEDLY CANCELLED
It is our understanding that the 1,000 helium balloon release scheduled for this morning in Van Wert has been cancelled. The official statement appears to be that it was strictly weather related; however, the tremendous outpouring from BSBO supporters most definitely served to educate and inform the event organizers and local officials on the dangerous consequences that balloon releases pose for birds and other wildlife. If we continue to write letters to public officials in the area in regard to next year, we feel confident that we can work together with those in charge to provide alternatives to the balloon release.


BSBO wishes to thank all those who heeded our rally cry and took the time to try to stop this from happening. We are especially proud that every individual who posted a comment on the event Facebook wall did so with a kind and courteous tone. Thank you for seeing the value in our request to do so!

We have no award to offer other than our heartfelt thanks for your willingness to help us speak on behalf of birds and other wildlife. If we could give you all a gold medal, we would. But how about a radiantly golden Prothonotary Warbler instead?!

Thanks again for all of your help. Please continue to write letters and voice your concerns about plans for this event for next year. BSBO will continue to try to find a way to convince the state of Ohio that this activity needs to be outlawed. [emphasis added to blog post only]

Thanks, once again, to Lisa Koerner Perry for bringing this to BSBO's attention last evening. Lisa: It means a lot to everyone at BSBO that you would turn to us for help!

Here's to a world where we all work together for a healthier planet, for birds, for other wildlife...and for us!

Email ThisBlogThis!Share to TwitterShare to FacebookShare to Pinterest
Labels: biology, off-topic, Q and A