It may be a true anomaly that we found the Sora pair: foxes (and coyotes and badgers and raccoons and dogs and cats) are abundant out here, so scavenging rates must be pretty high. That said, the rate of birds dying across the country is pretty impressive right now. Obviously a lot of my friends do pay attention to birds, but 5 posts in 3 days about dead birds is a bit much* (highlights below).

It seems that life is throwing things at us again: on the 24th, a Marsh Wren, and on the 25th (today), a Mourning Dove.

These are suspicious. In spite of being on a road* these are unlikely to be roadkill. Both were found on our dead-end street. The street ends with big rocks and unpaved caliche, so folks hit the brakes pretty hard when they get to that point, not that they're going terribly fast with only two blocks of acceleration... That said, both the wren and dove were on the south side of the street; the side that nobody actually drives on because it is loose rocks, dirt, and caliche. So I doubt that these birds were roadkill. They were both beneath power lines, about half a block apart.

The Mourning Dove was a bit worse for the wear, so I left it in place (informal scavenging study?) but the Marsh Wren is now in the freezer - it was in excellent condition aside from a few missing feathers just above the right eye (point of strike?) and the beak being slightly misaligned.

It's not that we have a morbid streak, it is simply that we process the information around us in different ways. A fleeting glance of "sad" and burying the creature does little for under-funded collections, and does zero for awareness of these species and their very simple threats.

Apologies for photo lack-of-quality (couldn't see the screen and was in a hurry in both cases): 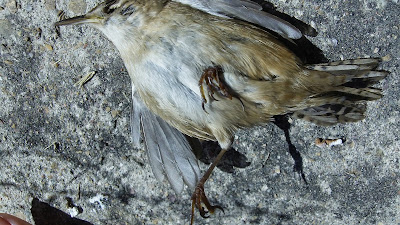 Marsh Wrens winter in the reedy vegetation at Post Park - perhaps this would have been one of them. 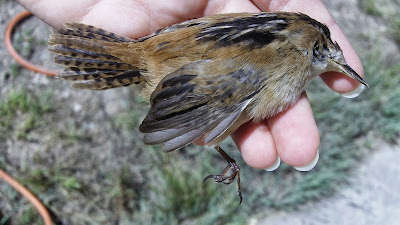 Mourning Doves are residents of the region, but it is a sad image nonetheless: 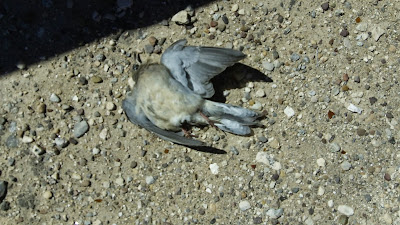