... there will hundreds at a glance.  Thousands.  Flocks so large on the trans-Pecos horizons it may look like wisps and puffs of smoke.

However, for now; well, as of a couple of days ago there is one.

In high-desert grasslands such as the Marfa Plateau or our Marathon Basin, the number of Lark Buntings can be staggering.  Large, seed-eating flocks questioning us with a call of "What?..What?"

My first returning Lark Bunting noticed was back on the 18th of July.  Yes, we also had a single group of seven fly over-head on August 10th.  That's been it.  The single male in mid-July may have been this particular male, photographed a few days ago in the same general area as seen over a month prior.

For a bird that spends much of its life in such large flocks, I wonder if a sense of liberation at being the "first" on a wintering-ground is felt or loneliness?  Both?  That question is ofcourse far more human than bunting, but still..

If it was a call to all or a call to none, no matter; it won't be terribly long. 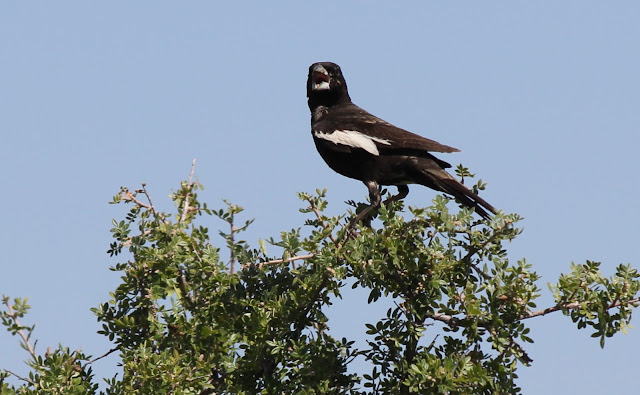 He will also lose that dapper, black suit of feathers; his summer-breeding plumage.