Mergus in waiting, round 2

We last checked in with Mergus, the female Common Merganser (Goosander, if you will - Mergus merganser) on Dec. 21 / day 1 - her arrival - and with this post, we're pretty much still there. Here's the first post, in case you missed it.

Since then (it has been a month and week since she arrived!) we've reconsidered her injuries. We think she was not directly struck by a vehicle, so much as 'rolled.' Hindsight, we now have the luxury of time to ponder these things.

Her left eye, seen below, was what we used as our standard for 'normal' when assessing the right eye. The bloodied and dislocated beak, slightly weak left leg, but perfectly intact wings leads me to think that she was 'rolled' by a vehicle. Either sitting on, or next to the road, her wings would have already been tucked when jostled/tumbled by a passing vehicle. Beak/head are extremities, and not well padded, so more susceptible to being damaged making contact with the road.

When folks talk about serrated beaks, 'all the better to catch fish with,' they might as well be talking about feathery sharks: four rows of tiny steak knives, all pointing down the gullet. All the better to catch fish with, indeed: and for that reason, feeding time involved gloves. General handling wasn't hazardous* (take precautions anyway - every animal is different, and usually they go for the eyes!) because she was so lethargic, but there's nothing like fish-eater mouth-bacteria scraping bare skin... so avoid it.


Beaks and eyes are understandably very important for a bird: a one-eyed merganser could possibly survive in the wild, but if the beak was useless, it'd starve. Hydration being most important, and not having the fluids or needles required for subcutaneous administration, the 'rural medicine' method was pretty basic: water dripped on the tongue, every two hours. Roughly one teaspoon per session. Not enough, but couldn't do much more without additional stress. At least the exposed bit of lower beak and tongue served as an easy option for drips, without having to touch her, restrain her, or move her at all.

The right eye, swollen and crusted shut, was something we could at least be mildly proactive about. Our big pup had been on eye ointment in the fall and hadn't needed it in a while: Neo Poly Dex - antibacterial anti-inflammation goodness. A tiny dab was applied, and the waiting game began.
Glad we had it on hand, as the Sunday before Christmas is never a good time to call a vet. Or have the flu, but at least I was able to call my rehabber every 30 minutes with a new question! 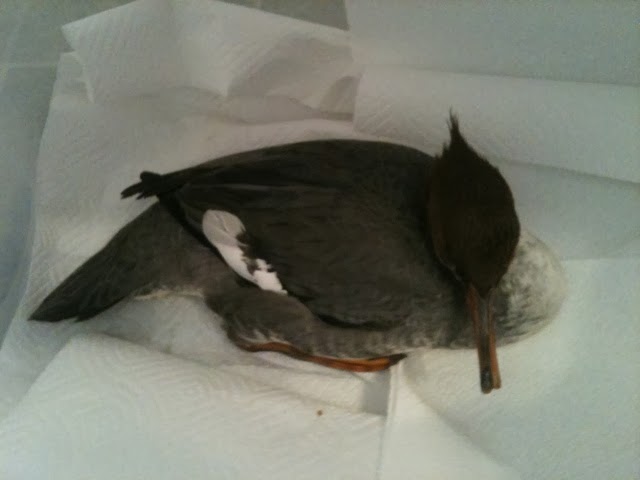 Due to the very fresh nature of the injuries, and not wanting to aggravate or further stress a bird already likely in shock, the decision was made to otherwise provide water, darkness, warmth, and just wait. As folks who have been through major trauma can attest, sometimes time is half the battle.


Rehab is 10% headache and 90% heartbreak, so if she was alive in the morning, we'd take it from there.

*** Texas is one of those states where you need permits for even transporting injured wildlife, so
we followed our rehabber's instructions and stabilizing the bird as best as possible with hopes that she could be transported with less risk (to her). Some states have a 'Good Samaritan Clause' for folks bringing injured wildlife to rehabbers - we wish TX would get on board with that.

Sneak peek: she did wake up on day two! This pic is likely from day three, though... 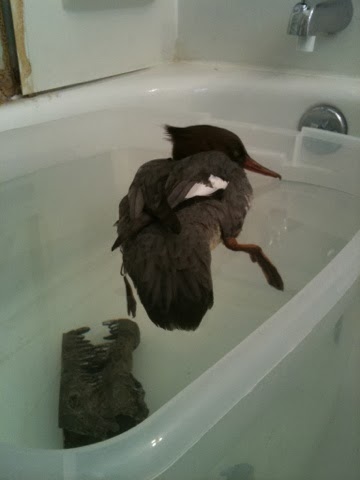