Mergus in waiting, round 3

I guess at some point I should clarify that this bathroom was in the midst of being destroyed for a remodeling project that stalled due to life. And the low lighting combined with mediocre iPod pics, eh, you get the idea. This is not art. Just be glad it's not scratch-and-sniff! As for the overall experience: would not try again. I mean, if I had to, but I don't suggest trying this at home. REALLY.

When post #2 last left Merg, she was floating, leaning heavily to the left. That was actually a bit improved over the previous day (she didn't get float-tested until day 3, so that pic may have even been from day 4). With a bird that is not landworthy (as opposed to seaworthy, which is at least a real word), one must be very careful about the keel: floaters are designed to float, with weight distribution, well, floating. Weight is on the surface of the feathers of the belly, mostly - not on feet, leg joints, and keel. That breast bone is prone to issues when improperly cushioned, so our most immediate non-hydration issue was to get the bird in its natural form. Floating. 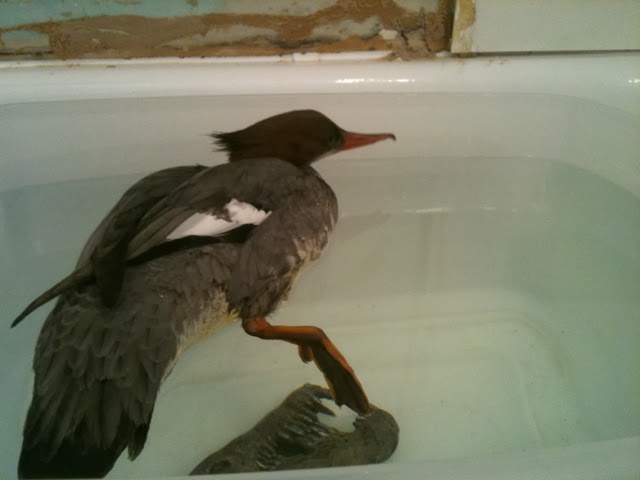 The leftward-lean had been noticed in the box, but it wasn't clear just how BAD it was until the float test: I thought she was going to flip her canoe. Leaning so heavily to the left could have been caused by many things, but without x-rays, we'll never really never know. Her tail was generally a bit off-center to the right for the first few days, which I suspect had at least something to do with the float angle, but it could have been due to spinal injury, neurological issue, or... something. All I could do was work with the symptoms as presented. And call my rehabber constantly for reassurance. With the flu, she sounded pretty horrible, but her words of support kept things sane.

The right leg, sticking out? It doesn't actually stick out. She's just leaning to the left so much that it just happens to be there. Awkward. To get her equilibrium and merg-ness back, float time went from 15 minutes on day 3 (mostly to soak the poo off of her vent) to 30 minutes of float time after each feeding. To keep her keel and feet and leg joints happy, or at least as happy as we could manage when not floating, her box was padded with 2-3 layers of shelf liner - you know the kind:

....that went under ~3-4 layers of paper towels. Since her strength was low, we didn't want to risk snagged toenails on actual towels, so her only exposure to real fabric was to dry off after float time on either t-shirts or pillow cases before going back into the plastic tub where we could leave her unsupervised. Float time was agony for the first few sessions: a duck too weak to keep her head out of the water is a drowned duck if you're not careful. Head mobility was also a concern, as
she seemed to only move her head left and right, never more than 180 degrees. At rest, as in the photo below, she would either turn her head slightly left and droop into the water, or straight ahead, and droop her beak into the water. When the nostrils would blow a bubble, I'd nudge her beak out of the water and she'd shake her head slightly before leaning back in. Not good. 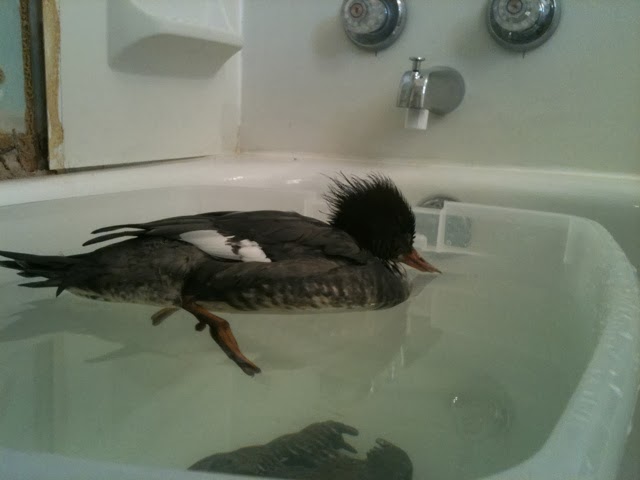 Thankfully by the time we were able to have extended float sessions, feeding levels (via pipette down the throat) had increased enough to give her some energy. Energy, in this case, being what keeps the nostrils out of the water, and self-hydration, but not much more.

A note on chaos: I still have no idea where my rehab supplies are. I barely used them after leaving Illinois in 2005. Some things did at least make it to the Double Bacon (pipette, tiny tupperware, Tylan powder for House Finches with conjunctivitis, you know, stuff), but while they all likely survived the move, there's no telling WHERE in this house they are. Boxes, we still have to unpack a bunch.

Somewhere on day 1, I did make it to the local grocery store where I found canned sardines and canned ..something else. Grabbed everything that wasn't seasoned and took it home. Not ideal.

So it was the day before Christmas Eve when I made an Alpine run because surely the drug store in town would have eyedroppers and syringes and... yes, actually. But 1 ml is pretty tiny, as is 5 ml, but I snagged one of each and the adventure began. I probably should have grabbed cat food, but I wasn't thinking and 4 different brands of dog food at home served nicely as backup. The big pup had already donated eye ointment to the cause, and his fish oil supplements were hijacked as well. Small dog had the highest fat and protein content in her kibble, so that's what was added along with water and sardine chunks. Crushing the kibble before soaking was important, but it'd take a few tries to perfect the technique. With a bit more energy and a non-broken beak, the 2 day fast was over. 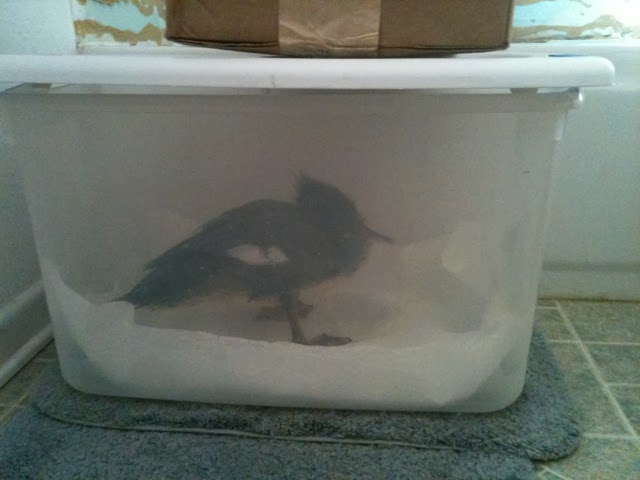 The double bath mats beneath the box were due to floor vibrations - even in the most isolated room in the house, Merg would turn her head when footsteps were felt. So, two bath mats, 2-3 shelf liners, ~3 layers of paper towels... that was a relatively cushy box. The only awkwardness was that across the bathroom, the red-eared slider we're fostering would clunk around. 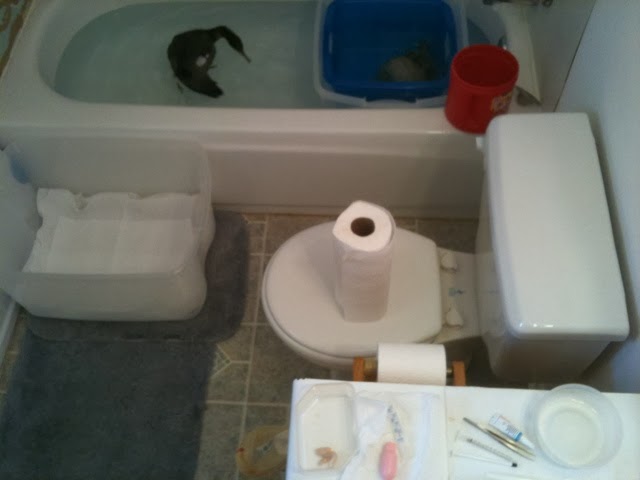 Merg went from float time in a plastic tub to the big tub, but partitioned for initial use. Action shot above shows dabbling prior to drinking, and a rare moment of appearing to go forward and right. "Decoy-like" describes the first few floating sessions, aside from dabbling and drinking. This photo must be pre-feeding, due to everything being clean. So very thankful that the new house is named Dos Baños.

At this point in time, however, panic is slowly setting in - there is a merganser, she is in our bathtub, our rehabber is in the first few days of flu that just knocked her hubby out for two weeks, we have no source of bait fish, the critter has not died yet (huge surprise, as almost everything dies overnight) - so this is excellent, but... now what?!
Posted by heidi