I was intermittently in the Guadalupe Mountains between 25 April and 5 May, with some surveys in Carlsbad, NM that are unfortunately beyond the regional scope of this blog.

Dell City, however, is totally appropriate (this from 1 May, on Texbirds):
It's ok, I would have had to Google it, too - but it is a little town west of the Guads with some farm fields on the SE side of town being watered... So if you'd like White-faced Ibis by the dozen, a few stilts, Violet-green Swallows, White-throated Swifts and slow cruising on side roads for Burrowing Owls, there's plenty of good stuff around.

... then there's the matter of research housing. Big, shiny windows. And a window-killed male Indigo Bunting. A female Lazuli had been loitering behind the building, on the safer side. So sad. So preventable.

In spite of gale force winds pre-dawn, McKittrick Canyon was crawling with Townsend's Warblers and Bushtits and good numbers of the usual suspects. Gobs of vireos (3 species) as well. It was the hike down that tried to literally blow me away. But such good birding before the winds kicked up... more on the Guadalupes to come, I am sure.

Amistad was phenomenal last week at the Pecos launch just off of 90 - almost every swallow other than VG, White-throated Swift, mixed warbler flocks. The San Pedro campground has some really nice diversity in the evenings - including "skidding" Lesser Nighthawks.

Day before yesterday was Fort Davis - the fort, of all places - which proved quite productive on the trails (map available at the visitor's center) for much easier Rufous-crowned and Black-chinned Sparrows as well as plenty of Rock and Canyon Wrens.

No rest for the weary, but great birding is an excellent consolation!

Wow. Tired. There's supposed to be mention of Virginia's Warb and Grace's in that post! 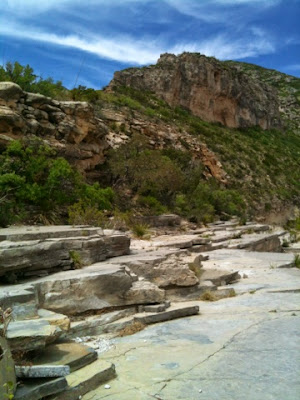 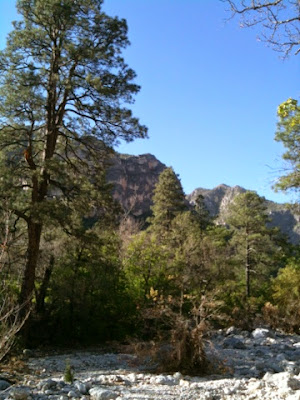 Since the Fort has already been covered on the blog, I'll stick to the Guads here. Williams Ranch has a row of hills just to the west: one transect was a Guad forsaken hill on earth, but it sure was beautiful. Most of the lower elevation surveys were generic creosote/stabby veg mixtures with Painted Buntings and Black-throated Sparrows and Cassin's Sparrows and Ash-throated Flycatchers and questionable terrain. Oh, but McKittrick... what a gem.

McKittrick Canyon had singing Grace's Warblers (click here for audio on youtube via the American Bird Conservancy), Virginia's Warbler, Warbling Vireo, Plumbeous Vireo, Cassin's Vireo, and on my last round of surveys, Red-eyed Vireo. One silent Cordilleran Flycatcher was nearly the highlight of my first survey, but considering I probably could have died of happiness, I can't credit just one bird.

Unfortunately, between work and drive time and general chaos, most of my documentation is point-and-shoot snippets of trail or roadkill - I did not keep up with location/county/day lists, much less anything else. I suppose that's the tradeoff of living in the moment. Savoring the air temperatures, slight breezes, earth-moving gusts: the things a librarian doesn't often experience in a library. Not that I'm much of a librarian, but my last few jobs have been in enclosed spaces. So notes took a back seat to the thrill of simply being. And I am ok with that. Besides, I saw birds!