This was originally posted over at SeeTrail; it is backdated here. It was also posted here, in a cleaned-up, more-formal version as Mearns Quail = Montezuma Quail.


This morning at about 9:30 I got a phone call from a dear friend and fellow birder. He reported a deceased Montezuma Quail at the Lawrence E. Wood picnic area in the Davis Mountains. I was *thrilled* because I thought that meant that he had picked it up for me. Alas. He was already in Balmorhea and the bird was still on the side of the road!

In a hasty scramble, Matt and I attempted to notify birders in Alpine and Fort Davis and anyone who might possibly still be in the area after chasing the Tufted Flycatcher - and we came up empty handed. We knew that the bird was dead. But was it still there? Had it been hit again? What state was it in; smashed or still fresh? We summoned the powers of Sul Ross and The Nature Conservancy in the form of voice mail, e-mail and feeble telepathy. By 11:30 I was able to sneak away from work; we'd not been able to check e-mail since our initial plea, but it was worth the risk to discover whether or not 'Schrödinger's Quail' was still on the side of the road for me.

Best case scenario:
Dead Montezuma Quail would be in the shade on the side of the road.

Plausible Situation A:
Dead Montezuma Quail would be picked up by someone else.

Plausible Situation B:
Dead, smashed Montezuma Quail would be on the side of the road.

Plausible Situation C:
Dead Montezuma Quail would be unable to be located.

Clearly with A & C, there's room for interpretation. A phone or e-mail not to be received for a long time, a scavenger traipsing off with a prize...

So for the longest 90 minute drive, the Montezuma Quail was in a simultaneous state of being there and not-being-there; I just needed to open the proverbial box and look. 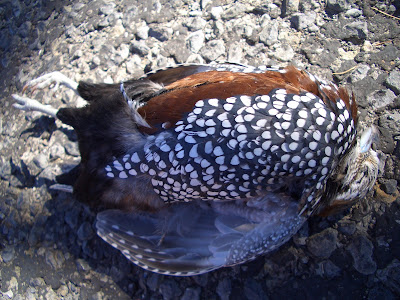 2: The facial pattern indicates that the bird is male. 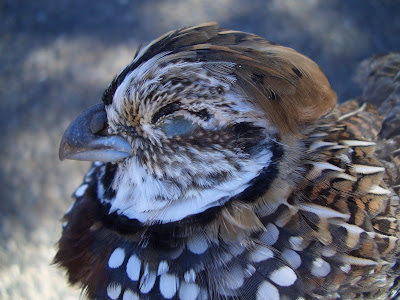 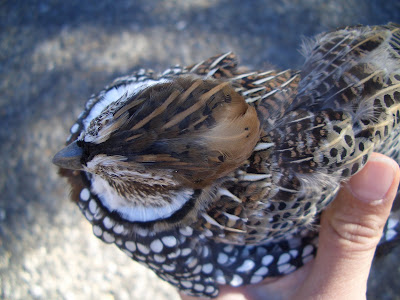 4: Disney's version of "Sleeping Beauty" got nothin' on this guy. 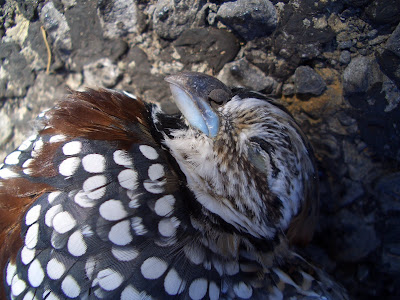 5: Big, scratchy, kicky claws. All the better to dig at roots with. 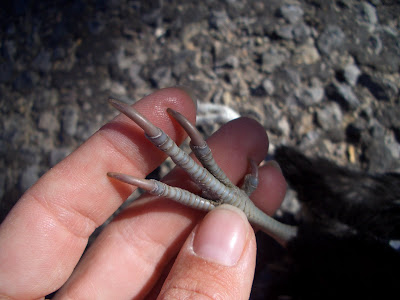 6: I spy something molting. The gap in primary feathers has a new one growing in. 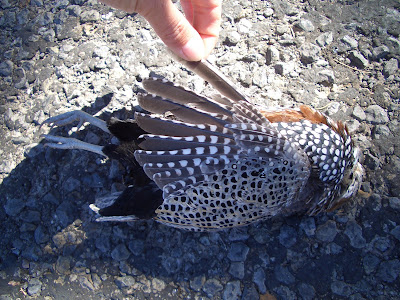 Post to be elaborated upon once we've walked the dog and had dinner and... you get the idea =)

FAQ #1
Q: Aren't you worried about catching something?
A: No. As with windows and wind turbines, cars tend to hit birds that are healthy enough to cross roads. If the bird was a carrier of [West Nile, Avian Influenza, etc] I'd still probably have to lick it (for fecal/saliva contamination) and that's just not how I operate.

Edit: the slightly more stuffy version of this post is over at that other blog that steals all of our attention these days.
Posted by heidi