Unfortunately the drought has put a phenomenal amount of pressure on all of the wildlife out here, but interesting things are turning up. The Varied Bunting pictures below were taken on Thursday, May 19 at a private residence in Marathon. This morning, Saturday the 21st, a tailless (??) Brown Creeper was seen on the north side of town, just to the NW of the 'Double Bacon' property line. No photos, alas. Everything is low. Everything is close to the ground, if not on it. The creeper was never more than five or six feet above the ground when we watched it. The Western Wood-Pewee in the yard rarely perches higher than the 4' fence posts. 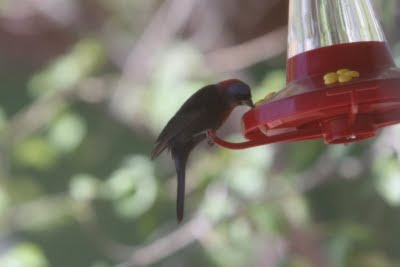 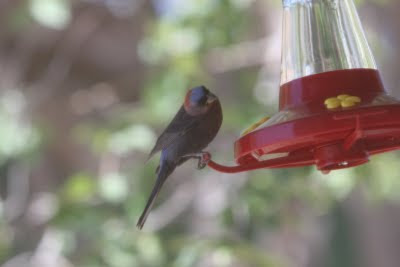 While many critters are being pushed closer to humans (and associated water sources), some simply are unable to survive. Two pristine specimens were picked up this morning, a male Audubon's Yellow-rumped Warbler and an adult male Scott's Oriole. While the Yellow-rump was suspiciously in front of a window, the window was covered with a screen and there wasn't so much as a ruffled feather on the bird. The Scott's could have perhaps hit a barbed wire fence, but it was also in perfect shape, just awkwardly posed in rigor. Both birds, when breast/belly feathers were ruffled for closer examination, showed muscle atrophy, no fat reserves and a sharply protruding keel/breast bone. Each bird relies on moisture, the warbler for the insects and the oriole for the nectar.

So whether the bird is dead or alive, unless it's riding a thermal, look down. Nooks and crannies and shady spots and wet spots and anywhere insect life may be, there's likely a bird nearby. Hopefully we'll get some rain soon and the warblers can go back to the treetops, but for now they're all grounded.
Posted by heidi