In the meantime... PICTURES!

The blog has been a bit strange lately, with a lot of travel, fire, and, well... here's the bird update in the meantime. It's been a busy week or three for the freezer* (salvage permits through Texas A&M).

Apologies for starting off a post with a decapitated Scott's Oriole (Icterus parisorum), but this is just chronological order for bird photos this month so far. 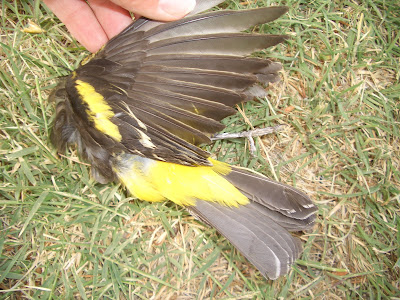 There is a responsibility when feeding birds, to ensure that they are reasonably safe from harm. So scattering seed in an area known to threaten birds would be unethical; in the middle of a road, for example. The 'Double Bacon' doesn't have any ground feeding options at all due to cats in the area and oriole/hummingbird feeding stations are quite high - it's an attempt to give birds the upper hand. The oriole above was killed directly under the [low] orange upon which it fed; (to be clear, it was not at the Double Bacon). The easy answer is to not feed birds at all if known threats are unavoidable. 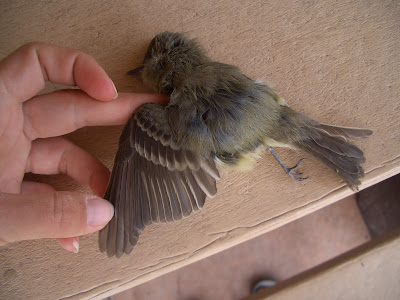 Now for a roadkill fresh off of someone's bumper; an Empidonax flycatcher of uncertain ID, leaning towards Dusky Flycatcher (Empidonax oberholseri). The eye ring was not really visible, dessicated as the critter was getting, but everything else was favorable. See the next Empid ID challenge for more commentary! 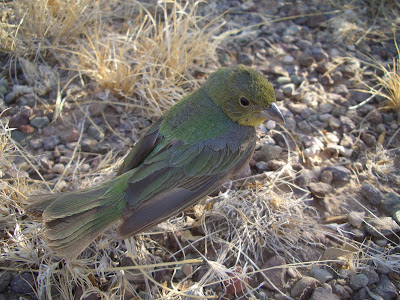 Near miss with a bumper: female Painted Bunting (Passerina ciris), 'rolled' (uninjured on the road) on Hwy 385 between Marathon and Fort Stockton. She had no visible injuries, no broken wings, legs, etc, no blood anywhere, clear eyes and zero response when she was picked up in the middle of the road. Not having a box handy (shame on me!) I placed her under a bush; often enough, after a few hours the stunned bird is able to fly away. Generally being kept in a dark, safe, predator/car-free box is the preferred method in case complications arise. Rehabbers will love you for it. 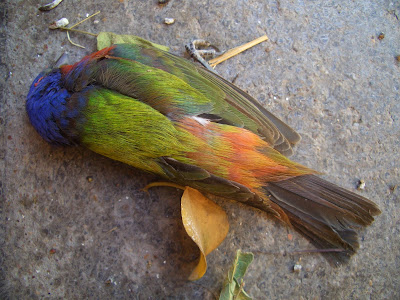 This next little fellow, unfortunately, is a male Painted Bunting (Passerina ciris) who hit a French door. While generally the 'French door' modifications on sheet glass / glass doors can help, it's certainly not foolproof; birds will hit pretty much any glass surface as long as the surface is larger than the bird. There's a certain fondness for old timey glass that's slightly bubbly or warped on the surface because it tends to not reflect as well and also be in small enough pieces that there's more framework to support it. Those factors combined help reduce window kills. 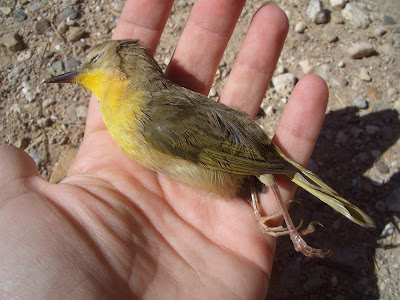 Some day there will be a post on how to tell what killed a bird. While this is not that post, the bird above is a female Common Yellowthroat (Geothlypis trichas), killed by a cat. At first glance, such an intact critter would likely be a window kill, and that's not entirely ruled out. However, only having one or two tail feathers left would indicate that a cat got ahold of it; if not before death, after. It was either a short struggle, or none at all (there have been studies documenting cats and crows lurking around windows, waiting for birds to hit). 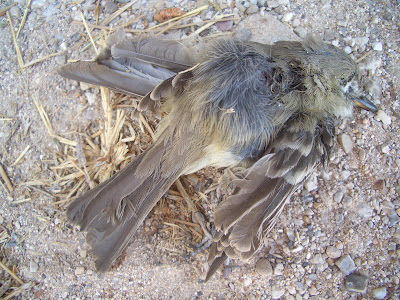 "A bird in the hand is worth two in the bush." Yes, but unless you have the Pyle guide to measure physiological aspects of the bird, Empidonax flycatchers are sometimes best left in the field. We suspect that the above creature was a Gray Flycatcher, (Empidonax wrightii), but it had more of a tangle with a cat than the previous bird, so field marks are a bit more mangled. In the field, we'd hopefully get a call note, a perching height/habitat preference, perhaps even characteristic tail wags. In the hand, this bird has ants. 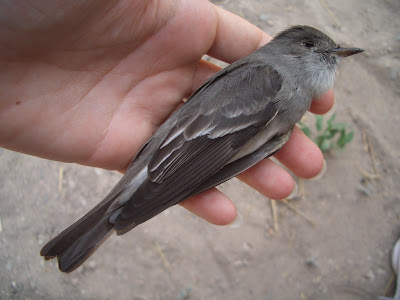 Another flycatcher! This time, a Western Wood-Pewee (Contopus sordidulus), splendid specimen found as roadkill on a day when the smoke in town was so thick that Marathon felt like LA; couldn't see the mountains on ANY side! Flying low must have been an attempt to stay out of the smoke, or a conservation of energy... a lot of things have been flying low, or sitting on the ground (Barn Swallows, especially) while waiting for bugs to pop up. It's a rough drought.

The above three birds were picked up on Friday the 13th (Freezerday the 13th?) 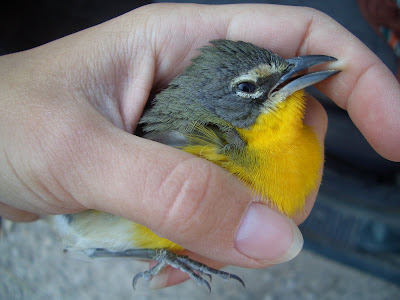 The Yellow-breasted Chat (Icteria virens) above was lucky, in a way, to have been found alive. No tail at all, no rump feathers, no secondaries on the right wing (those are the ones that provide lift). Intact, hunting for insects, unable to escape a cat. So, rudder and lift-less, unable to escape from humans, we snatched him up and drove him to Fort Davis.

From the rehabber:
"Thanks for bringing him to me. He has some serious cat injuries which take a toll within the first 24 hours. He is feisty, and has eaten grapes, suet, soaked cat food, but his favorite is human fingers." [Note that the photo shows the chat latched on to a finger!]

No news, however, since the Sunday night e-mail. 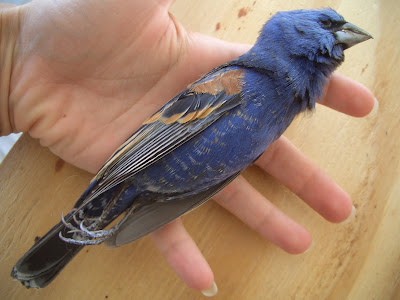 Next up in roadkill: Blue Grosbeak (Guiraca caerulea). I suspect that our increased explorations along Hwy 385 will turn up quite a bit of freezer content. Roadkill itself makes more sense than window kills; there's momentum on all sides, unlike the static mirage of a window. It is generally unavoidable, though I bristle when people do not at least tap the brakes when approaching large, cumbersome, perched-on-the-ground Turkey Vultures who need to take off into the wind. Yes; most get out of the way in time. But give them the benefit of the doubt, for they DO shatter windshields. 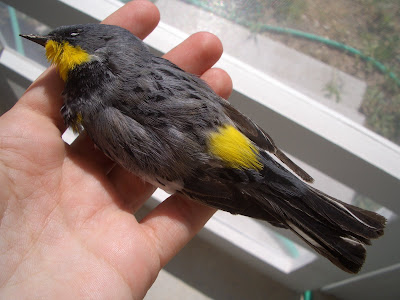 Last and quite diminutive, Audubon's Yellow-rumped Warbler (Dendroica coronata auduboni) is something I hadn't expected to be roadkill. But with their tendency to ground forage, perhaps I shouldn't be so surprised. The lovely male above was likely going to stick around and breed in this area, a very narrow sliver of Yellow-rumped Warbler nesting range... other than the chat (if you can really call it a warbler), there's not a whole lot of warbler breeding out here. At least we lucked out and got the eye-candy of yellow-rumps! ('Audubon's' Yellow-rumped Warbler is the showy, yellow-chinned western counterpart of the 'Myrtle' Yellow-rumped Warbler, who has a white chin, among other things.)

Eventually I hope to have full posts up, one post per critter or two, with the various angles of wings/tails, etc for future reference. For some reason the color of down feathers strikes me as especially interesting because white/gray/black down seems to be somewhat randomly scattered through the critters, but my work with dead birds is still relatively* limited. (Relatively, considering some folks spend their lives preparing specimens and working in/around collections!)

Also, let it be known that Matt has found a good majority of the critters in this post. Between the two of us, a dead bird out here doesn't stand much chance of escaping an 'afterlife' in scientific/academic data!
Posted by See Trail