*Recall that we are permitted through Texas A&M University.

I generally hear that when outside the Lesser Nighthawk's range in much of TX. Where they may get a few here or there. Or do they?

In the trans-Pecos, we get both. Perhaps even more Lessers to an extent. It's not too difficult to tell them apart when you live amongst them.

"Nighthawks" are in Family: Caprimulgidae, along with "Nightjars." Generally having long pointed wings. Mostly active at night, they are sometimes seen in daylight, often come dusk. 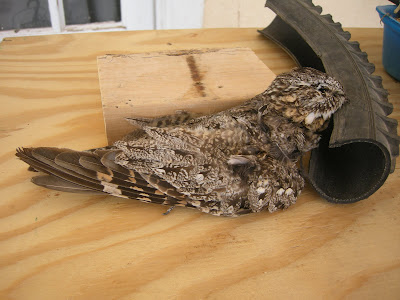 Look at those long primary wing feathers. Do they have small, buffy-tan spots on them?
Aye.

You are then looking at a Lesser Nighthawk. 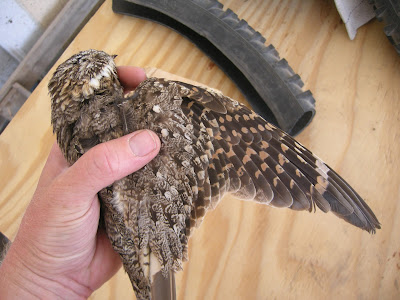 This particular bird is a male. The best way I can tell is that WHITE "primary wing-bar." The females' stay buffy-tan like those aforementoned Lesser Nighthawk wing-spots. 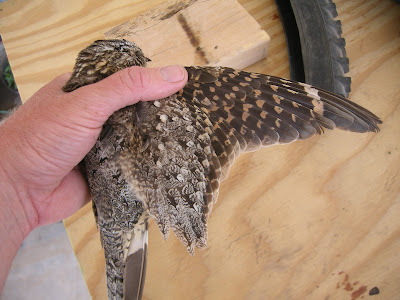 Underneath as well for the male: 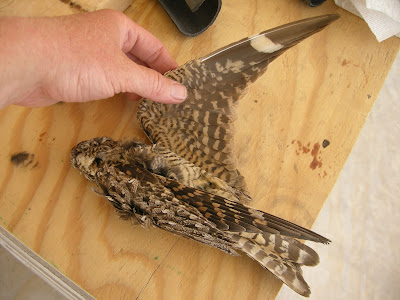 Nighthawks are entirely insectivorous. Like many avian insectivores, they sport bristles at the base of their culmen: 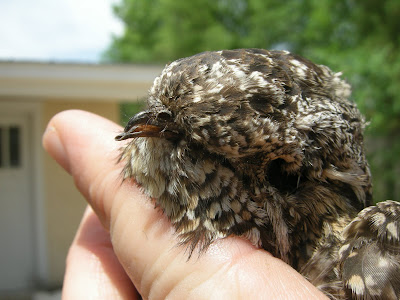 Their tiny beaks do no justice in illustrating just how wide their mouths open. Those hinges are pretty far apart: 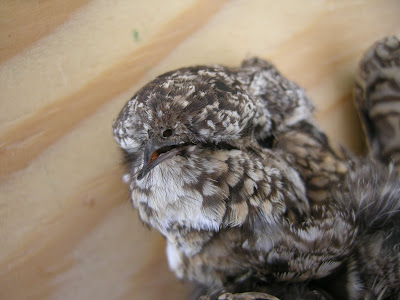 Heidi taught me in the past that wildlife rehabbers have real issues with feeding injured nighthawks and nightjars. Insects, yes. However, they only feed on the wing and these guys fly fairly rapidly. At their rate of speed to the prey-item, that flying insect is thus moving the nighthawk's way very quickly as well. They can't successfully feed by dropping a cricket down the hatch. Perhaps she can speak more on that.
This individual needed no rehabber.

Though nearly always observed on-the-wing by mere humans. They ofcourse have feet. They perch; also, they scratch and preen like Aves do. Check that "toe" : 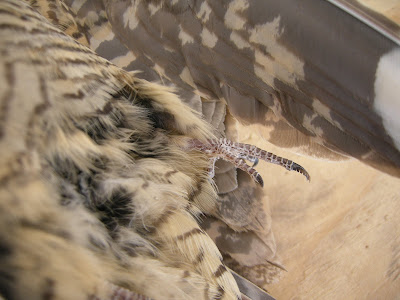 Long-legged, they are not. 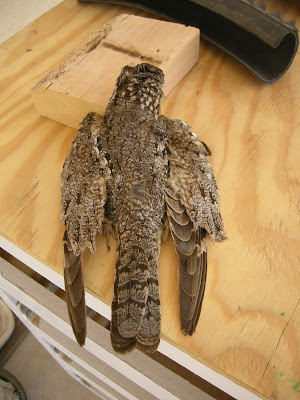 Lesser Nighthawk also fly far more consistanly close to the ground. (Which makes them a seemingly big roadkill hazard out here. They are extremely aerodynamic which is an asset. I can't believe I've yet to hit one. So many close-calls. I'm quite glad I haven't.)

Common Nighthawks give a classic well-known vocalization in flight. Lessers DO NOT vocalize in flight.

Common Nighthawks fly high and have a bouyant quality about them in flight, with fewer wingbeats. Longer-winged than the Lesser, that white primary bar also does not go as near to the wingtip with Common Nighthawk. Though the latter, hard to tell if that is the only of these qualities one looks for.

Finally, yet once again, whether perched as in the initial photo or in flight in good light with good looks... : 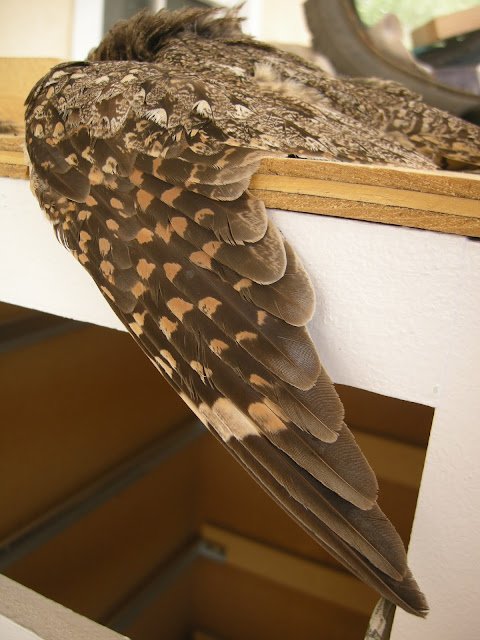 The Texas Cooperative Wildlife Collection (check link in sidebar) at Texas A&M University does not have a Lesser Nighthawk for Brewster Co.

Here you are, Dr. A.
Posted by MWYork