Apologies for the blog silence lately; a few things are afoot. There's been a bit of travel, job shuffling, a bit of summer school overload, some baby-bird-emergencies, helping a neighbor move, and generally a lot of *stuff* that simply hasn't been able to wait. So the blog has borne the brunt of our negligence.

There are at least two Zone-tailed Hawks along Hwy 90 between Marathon and Alpine - at least one of them, most frequently seen over Marathon, is missing the tip of a primary on its right wing. There's one with a ratty tail but symmetrical wings that has been seen over Post Park. And then there's one that lurks along the Alpine end of 90 which has symmetrical wings as well (tail condition wasn't noted).

A few exciting roadkills have piled up since the freezer was last emptied: Ash-throated Flycatcher (2!), Greater Roadrunner, Eastern Meadowlark, Black-chinned Hummingbird... the latter, might I brag, was spotted at about 65 mph. Unfortunately, the freshest Cassin's Sparrow on record was removed from under a wiper blade. Poor thing.

Since I don't have a photo of a wet baby bird fished out of a fountain (House Sparrow, if you must ask), here's a photo from Post Park before the 4th of July dance: no fireworks this year except in Fort Davis. Of all places, it had nothing left to burn! 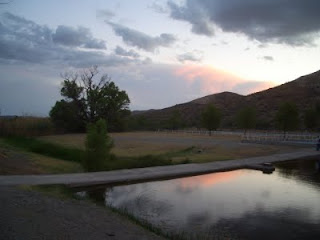