Reakirt's Blue (Echinargus isola) is a tiny, tiny little butterfly. Contrary to the image below, it does sport a lot of blue. In this image, the coppery hints are a bit misleading, but even without those tones, it doesn't look quite like a 'normal' Reakirt's Blue. But what is normal, anyway? 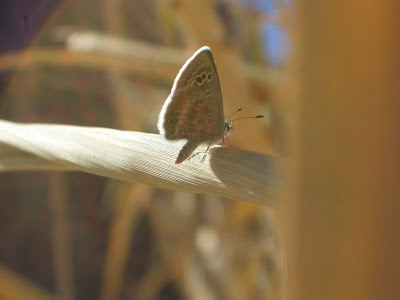 Sneaking around to the sunny side - watch your shadow, you don't want to startle it - check out that band of white frosting, cobweb, lace, that continues below the black dots. There are five black dots, but the wings are being held up a bit, so only four are visible... but what fantastic, subtle, intricate details this tiny creature shows. A quick e-mail exchange with the brains of Texas Lep. Survey confirmed that this pattern is a "winter thing" and that works for us. 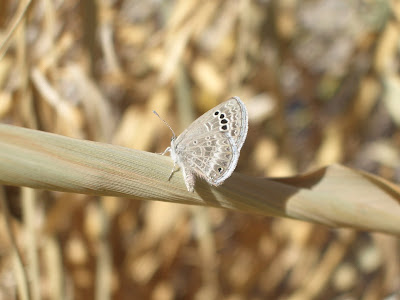 Winter blues. Perhaps that's not fitting. This photo was taken in early January.

It was hard to feel any sense of 'blue' because at the time, there was some celebrity birder-watching to be done! The Reakirt's Blue was loitering along a walkway that connected a certain well-birded parking lot to a certain Santa Elena Canyon, and I'd snuck away to see some early blooms while some of the state's most elusive birders combed the area for a certain flycatcher. 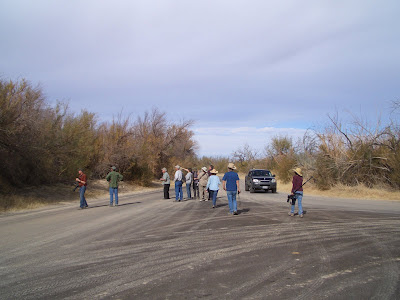 Right, so what does a summer Reakirt's look like, anyway?
Sideways and thirsty. But also distinctly less frosty! 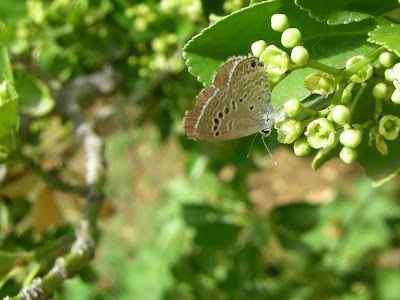 (Via Matthew York, from Pollinators between rain events)

This entry includes photos from early Jan, was posted in March and backdated for Feb - apologies for any RSS feeds that were scrambled!

EDIT: It seems the 'winter' thing may not strictly be true, as similar markings exist on a Reakirt's photo (taken in Midland, TX, by Ryan Shaw) dated from June. Curious!
Posted by heidi