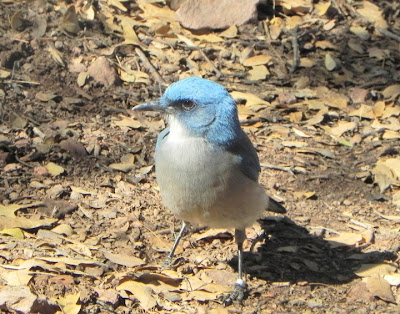 "A Mexican Jay near the Pinnacles campsites in the Chisos: note the silver band on the bird's left leg. In 1996-97 a graduate student came to BBNP to conduct research on Mexican jays and banded a number of birds, including some hatch year birds. Either he never completed his work or he didn't publish so there is no record of study results but an indirect benefit was the bands provided a datapoint... those few jays still flying aorund in the Chisos with bands on their legs are at least 15 years old. This jay is definitely a viejo..."

(Crossposted at I found a banded bird)
Posted by heidi