Cats have hairballs. Birds do, too. Owls are perhaps the best known family for their pellets - most folks have to dissect an owl pellet in school at some point. Frugivores (fruit eaters) don't consume so much indigestible stuff, so they don't have to cough up pellets. Long-billed Curlews, who eat crustaceans, do hack up pellets. Shrikes, hawks, even kookaburras - if they eat bone, fur, etc, as part of their diet and can't digest it, they have the ability to expel the undigested material.

Meet 58BG, who happened to fling a pellet while I was recording:

In case you missed the pellet being flung: 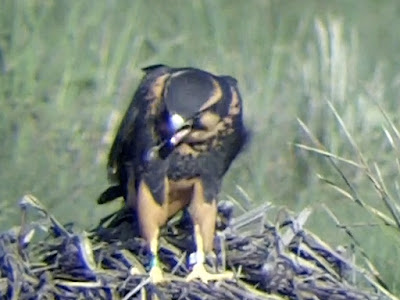 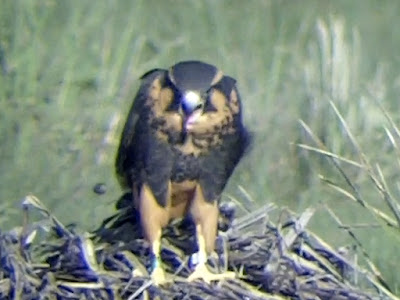 That gray clump? That's the pellet. Don't see it? Meet my horrible photoshop skills (bear with me, it's a new editing program I'm tampering with!) 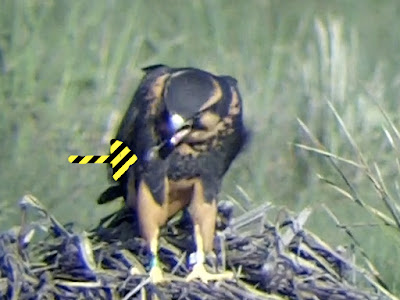 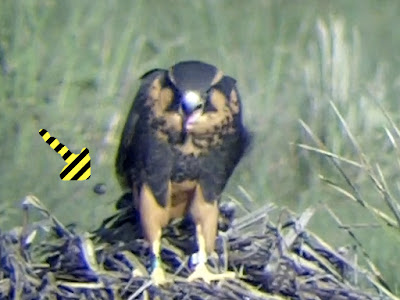 The glob of feathers and bone being flung away looks pretty darn huge. So like any bodily-function enthusiast, after 58 left, I went over to investigate. Considering at least two pellets were expelled (one shortly before I started recording), that's an awful lot of Mystery-Quail-Parts to be coughed up. Not wanting to let a good photo chance go to waste, I now present this lovely image: 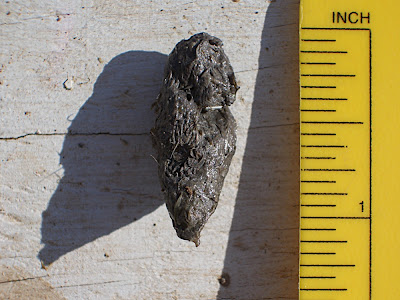 For those inquisitive minds, I did not handle it with bare hands, that's what sticks are for. Texture, however, was easy to note - slimy! Once it dried, the texture looked a bit more powdery, but that's less exciting to discuss. In a few days it will probably crumble away to nothing, but at least it has been documented in a fairly fresh state. Eeew.

Matt would like to point out that our birds are not dainty eaters. They do not carefully select which nibble of muscle upon which they will snack. They are given whole quail and if they don't fling the feathers away, down the throat! There isn't much waste, either. A very well-picked quail ends up having only wings, legs and maybe a keel... if that! Apparently heads are a delicacy, we'll find parts of the beak, but I suppose the skull is as lightweight as the rest of the other bones, so that's pretty easy to choke down along with other juicy morsels.

A quick note on other bodily functions: 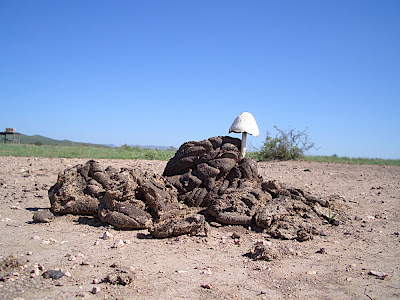 What goes in comes out as an entirely different segment of the environment. After giving energy, it continues to nourish the ground and shelter small creatures. And it's very handy to roll, if you're an excrement enthusiast like dung beetles are. While 58's pellet may never sprout a mushroom or be bundled off with a flourish, it's far less obnoxious to accidentally step in!

Thanks for stopping in, sorry to have ruined your appetite!
Posted by heidi