"The outstanding scientific discovery of the twentieth century is not television, or radio, but rather the complexity of the land organism. Only those who know the most about it can appreciate how little we know about it. The last word in ignorance is the man who says of an animal or plant: "What good is it?" If the land mechanism as a whole is good, then every part is good, whether we understand it or not. If the biota, in the course of aeons, has built something we like but do not understand, then who but a fool would discard seemingly useless parts? To keep every cog and wheel is the first precaution of intelligent tinkering." - Aldo Leopold

Apologies for the lag in posts - our babies have left the box! So we had a few days of waking up at 6 am and going to bed around 11, followed by more of the same. 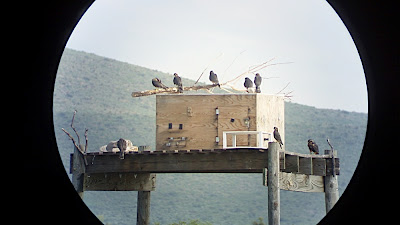 The roads have yielded roadkill javelina, plenty of live gigantic red/yellow millipedes, the occasional tarantula, and on Friday night our first snake. It was tiny, fast moving, and gone by the time we turned around to look for it. For a rainy 67 degree evening, hopefully it found warmth and shelter quickly! Only two or three stereotypical desert toads have been seen, but tonight while unloading gear after our evening observation, Matt found and brought me a little spadefoot type toad (herp folks, we need your help! we have no herp guide!) ...that was the 9th. On the 10th, Matt found a crazy looking Vinegaroon (looks like a scorpion on the front, but has a looong pointy vinegar-shooting needle-like tail). On the 11th we were visited by a whiptail lizard of some sort and a teeeny little walking stick. On the 12th, we had a very cooperative [name withheld for photo quiz] butterfly. The 13th provided me with my "life" [Western] Mexican Hog-nosed Snake! 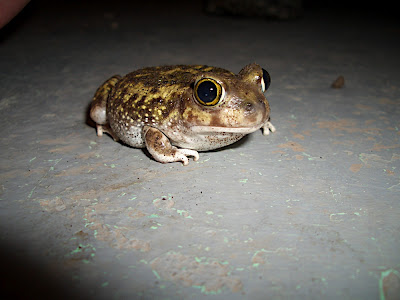 We've had Mule Deer and crazy grasshoppers, a splendid abundance of different weevils, plenty of dragonflies that never land (orange shadowdragons?) and the heat-of-day hum of cicadas. 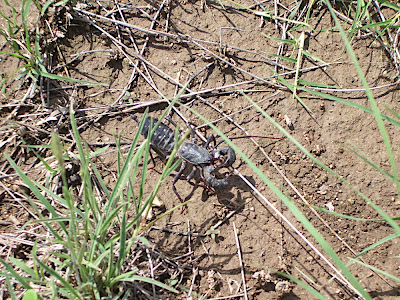 The site has also provided ample Vesta Crescents, tiny orb weaver type spiders, two flyover Long-billed Curlews, one flyover Willet and one other flyover non-Killdeer wader that never cooperated. Add the teal (silhouetted, sadly) we saw on our way to work on the 10th and it's feels almost coastal! ...almost. 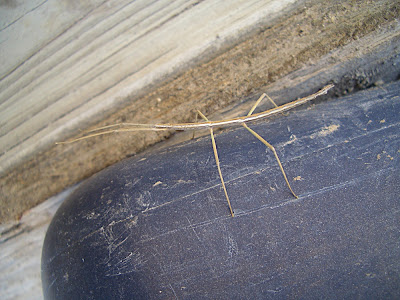 Today we had our first Texas Horned Lizard, first chance to update the blog for a while... the usual madness. Hopefully we'll get the lizard and some snake photos posted soonish. Until then, a few posts are scheduled to pop up in the next few days regardless of whether or not we have access, so enjoy!