Posted 11 March 2012, and backdated to match original post's date.
Spring is in the air - temps went from the low 80s to the 20s and back to the 70s - insects are gradually making their appearances. Plants are not yet eating wildlife. Hm. Maybe once the flowers go nuts. To celebrate the spring return of the bug-eat-bug world, here's a re-post from 27 July 2010, because we can. It was written during our summer of monitoring Aplomado Falcons, 10 miles east of Marathon.

There's a little green plant with pretty white flowers that grows a few feet NW of our shade tarp. 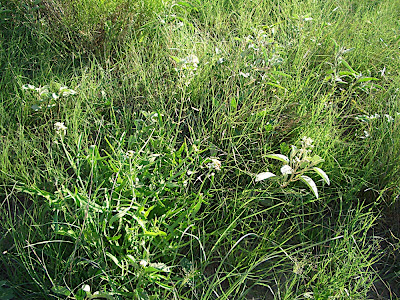 We really didn't pay much attention to it until one day it ate a Pearl Crescent. Upon close inspection, it literally appeared that the butterfly was dead, stuck in between flowers and caught on a dead bloom. I had seen a butterfly in a similar situation in New Mexico almost a year ago, but the culprit had vanished. This time, the critter was still there. It was the dead bloom... also known as the Ambush Bug! 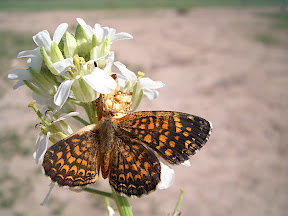 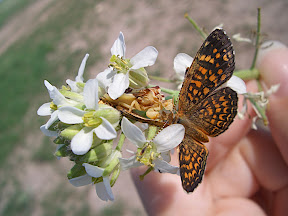 Technically a shrub is a woody plant around a meter in height. This plant is not a shrub. But I've affectionately started to call it the Ambush Shrub, Shrub of Doom, etc. On the first day that we saw the Pearl Crescent succumb to a tempting flower, only one Ambush Bug was noticed. That was the 16th. On the 18th, four were counted on four blossoms. On the 20th, there were six of them, still on four blossoms. And along with them, there were little flower spiders! So it wasn't too much of a surprise when a Reakirt's Blue was nectaring in an uncomfortable position...

How many threats to the butterfly can you find in the photo below? 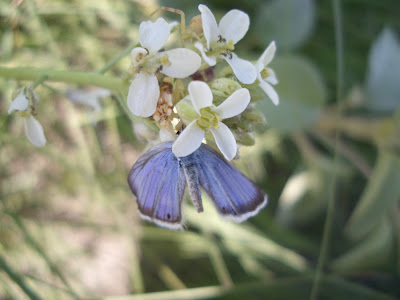 It will be interesting to see how this menu diversifies over the next two months. Thankfully our Nysa Roadside Skipper hasn't fallen prey to the Ambush Plant yet, and hopefully our one Small Checkered Skipper at the site won't be the next, either. Granted, that may be the only way to get a cooperative photo of it! 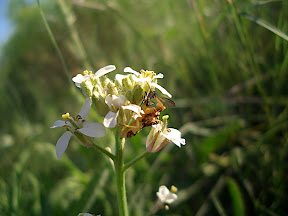 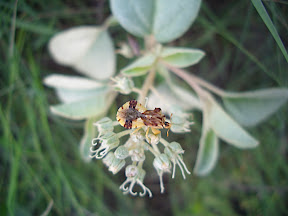 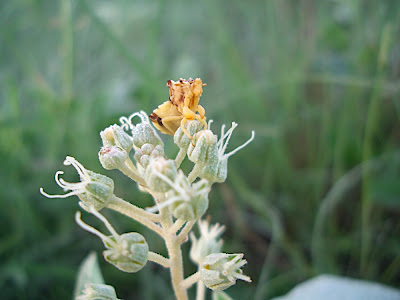 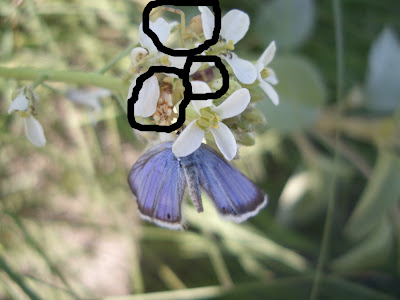 We'll cut the post here and reminisce over how 2010 was the greenest, wettest, most spectacularly birdy and buggy year that has been seen out here for a long time. And it was followed by a record drought with incredible winds and heat and that combination led to record fires. Fires are necessary, but that was quite the combination of forces.

Eventually more of the Aplomado Falcon photos and videos will be cross-posted over here for easier access, but it's a species that has had nothing but uphill battles in this region. So for folks wishing to see them, we'll suggest Laguna Atascosa NWR and the Rio Grande Valley.
Posted by heidi