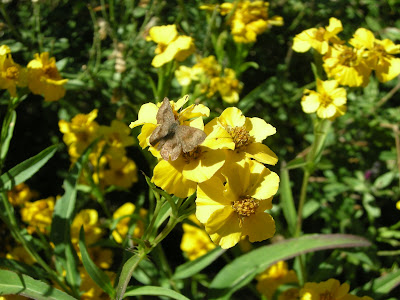 Fatal Metalmark (Calephelis nemesis)
Hmmm, ... species name is nemesis. Makes me wonder if the original voucher hunter saw it, looked down to get his or her glasses, looked back and could not find it again; at least for awhile.

"Scintillant" metalmarks are quite small butterflies. Usually only one, perhaps a second, in large expanses of nectar sources. If in the shadow of a leaf, probably passed by. Spotted by the casual observer, likely thought to be a boring little brown bug.

However, if one has the opportunity to look closer. Closer, still...
They have a narrow but amazing blue-silver metallic postmedian and submarginal band. 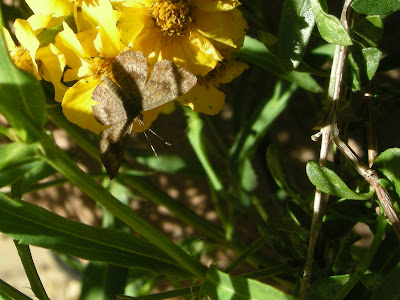 "Common", though possibly often missed, from the southern half of Arizona to the southwestern half of Texas. They are some of the more difficult butterflies to identify. Thankfully, I guess.., (C. nemesis) is the only scintillant we get in the Big Bend Region. However, if you think you have found a different species, show me... 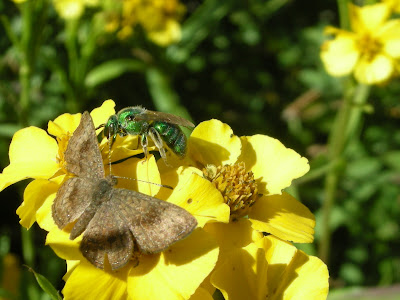 Incidentally, Cuckoo wasps make up a family of small, metallic wasps. They are sting-less, by the way. They are mostly parasites in the nests of other wasps or bees.

A final flight of adults before the cold snap? ...

"For whom the bell tolls, time marches on" - Metallica, Ride the Lightening, some year back before they cut their hair and went soft. You know, the good years.
Posted by MWYork