With the exception of Fatal Metalmark, the October butterfly update covers everything we've seen on grounds at the Marathon Motel. That said, this post features two of our summer lovelies.

It's not often you see the underside of these two critters. Bordered Patches tend to nectar with wings spread and Common Mestras never land* (tis the truth!)

The upper side of the Bordered Patch is a bold, deep black with tiny little pale specks below a wide splash of sunset orange. For the lower side to be so ornately and intricately patterned I'm caught off guard every time. 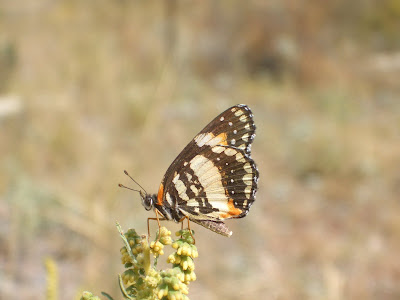 Now, about that Mestra that never lands... As with the aforementioned patch, the Common Mestra has a very different upper wing pattern; it is nearly entirely white with just a smudge of orange at the tips. So most views are of a low, weak-flying blur of powdery white and perhaps a faint hint of orange. How very different below!

Finally, a favorite non-butterfly insect of ours: 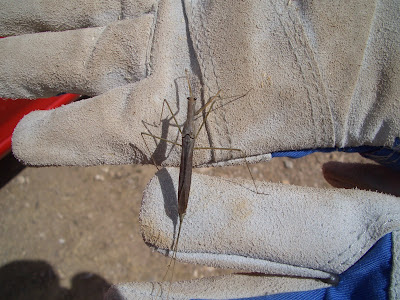 The poorly named Water Scorpion should really be Water Mantis; we love it anyway. The individual in hand was seen flying from north to south near the motel, a mind-boggling aerial identification. It's a bird! It's a plane! It's... not a mayfly, not a dragonfly, not a damselfly, not an antlion, not a crane fly... so when it plunked down on the roof of Matt's truck, I grabbed it. Gloves were due to playing with firewood, it's unlikely that this critter-on-a-mission would have taken the time to pinch me. Still, to handle one that was alive, flying and nowhere near water? Too cool!

Are you looking at the shadow of the front legs? And the double 'stinger' that really isn't so much a stinger as breathing tube? ...thought so!
Posted by heidi