This morning (Tues, Nov. 30, 2010) we arrived at Daniels Ranch at 7:15 and split up to cover more ground; each with radio in hand, we covered from the adobe/mud brick house all the way to the eastern edge of the grove nearest to the RVs. A fellow from IN showed up a bit later and thankfully had a radio as well, so we were all in communication.

Matt located the Tufted Flycatcher at 8:05 and radioed to the rest of us as more birders converged in the vicinity (Peggy and RP, on their third TUFL watch). Another set of fellows from Austin/Bastrop joined us almost as soon as the bird was found and we were all able to watch and photograph it until our group dispersed an hour later. It was foraging in the cottonwood grove between the river and the road in the corner closest to the old adobe-style (mud brick?) ranch house. The grove is not to be confused with the picnic area just adjacent to the house, however.

Blogger keeps eating the video - three tries now - but to tide you over until the video gets sorted out: 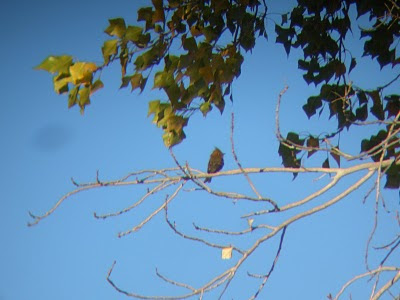 Edit 2: other sightings from the park this week have now been posted here.