"Nickel-sized hairstreaks, mostly tailess, with wings patterned in brown, gray, and black. Most are on the wing early in the season, and some are among the first spring butterflies in some localities. Generally not as fast flying as other hairstreaks. Adults perch with wings closed." - Brock, Jim P. & Kaufman, K. Field Guide to Butterflies of North America. 2003.

The Elfin (Callophrys sp.) we get out here in the Big Bend Region and a swooping third of Texas: 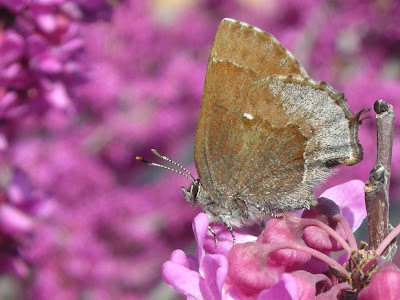 She is actually laying eggs ("ovipositing") on this redbud tree, a larval foodplant for the species.

Henry's Elfin is actually a "tailed" elfin. The "tails" are those little extensions on the hindwings.

Often, hairstreaks (tribes Theclini and Eumaeini), rub their two hindwings together mimicking antennae with these tails. So you, me, or the Northern Mockingbird over there will take a bite out of their wing should the mood strike us....; not out of their actual head and thorax segment.

Here's a most significant characteristic(s) of elfins: Often quite localized, ALL elfin species have "1 Brood."

What does that mean? 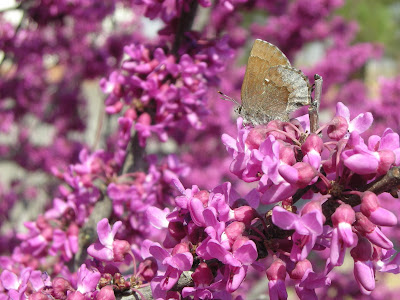 Localized:
Populations that are localized are just that. Inhabiting sporadic, not always connected, pockets of habitat and geography. It may be another hypothetical 100 miles or more until the next patch occurs.
Spots on a map. Not a broad paintbrush stroke on a map.

The quick and easy explanation of a butterfly's life cycle is this: Egg laid on or near the plants that will serve as the food for the caterpillars.
Caterpillars or larva(e) is a little eating machine. It passes through around 5 growth stages. With each stage, they are larger than the last. The final time it reveals not a larger larva, but the next life phase:
Pupa or chrysalis, the stage in which the larva is transformed into the adult.

In many cases a butterfly passes through all 4 life stages in a matter of weeks, the whole cycle repeated several times during the year, multiple generations, multiple "broods".

**HOWEVER, Some species have only one brood per year. These usually have a short "flight season."

They are only around once a year. If you have them, if you find them; enjoy them.

How fortunate we are to have them here. Here? Here. Here in portions of the tri-county area. Here in the state of Texas. Here. North America. Here. Alongside for the ride.. Here. Earth. Fellow. 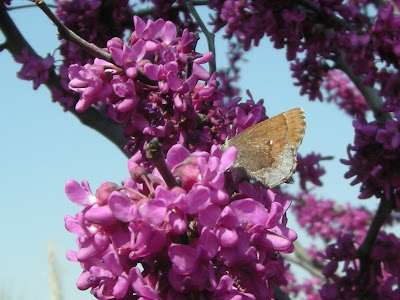 Look up. Look out. Look around.
Say it, don't spray it.

Where do we go from Here.
?

Beware the 'cides of March.
Posted by MWYork