"Confirmed that H. diffinis is NEW for Brewster. It probably occurs "commonly" in the Chisos, but nobody's ever reported it up there... Not unusual to find them at higher elevations in NM and AZ...." - Texas Lepidoptera Survey, 25 March 2011. 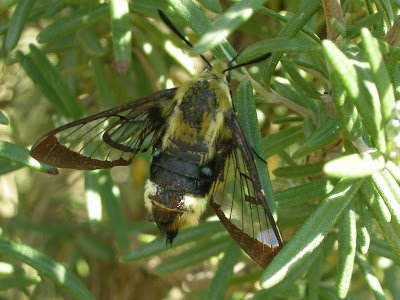 I happened across this guy, Hemaris diffinis, back on 18 March 2011. Simply perched near the center of a large rosemary shrub in the Courtyard Cafe at Marathon Motel. Add another first county documentation discovered on grounds at the motel.

Click for the original post.
You don't have to scroll down too far actually.
Posted by MWYork