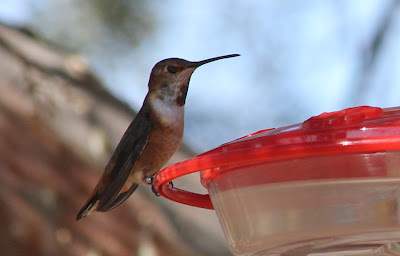 This bird was banded here at the house back on 8 December by Kelly Bryan.
That day there were two Selasphorus types. One was already banded, but on the left leg. Kelly bands all his hummingbird new-captures on the right leg. We really wanted that recap, because it wasn't local. Really, any recap is filled with goodness, but a bird not banded here...., oh well.

We got this kid. It is a hatch-year (HY) male Allen's. Late December and there is still this territorial sprite waiting for the sugar-water to thaw this morning. He'll also guard the drip and other portions of the back-40.

Well, in a week and a half from now we would have to celebrate his birthday. He'll have graduated to after-hatch-yr (AHY), we'll even know him to be a second-year Allen's. All that, if he sticks. Check the gorget, the sides are starting to show some shading.. 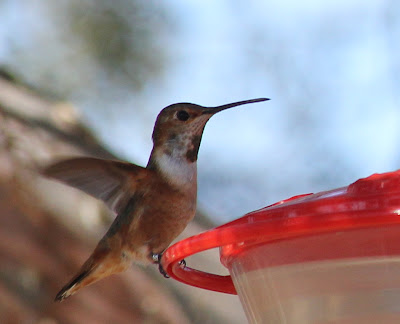 Those who are interested in an Allen's Hummingbird for their life/year/state/county/town/block list are generally welcome to stop by. Just give us a shout or email to let us know you're coming. We can, in turn, let you know if we would've seen him that day.
Posted by MWYork