They are diving ducks in the Aythya genus.

Heidi came home this morning with a member of this group. It was salvaged on Hwy 385, just southeast of town and the Hwy 90 - Hwy 385 intersection. 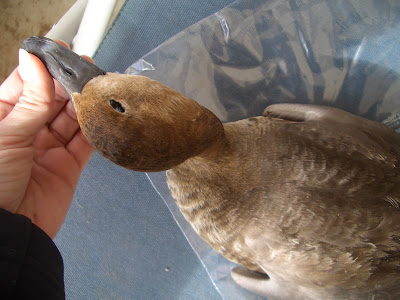 This genus of diving ducks has legs set far back, and quite far apart. If you've ever seen it, you'd know it makes walking on land difficult for them. Many pelagic species are the same way. 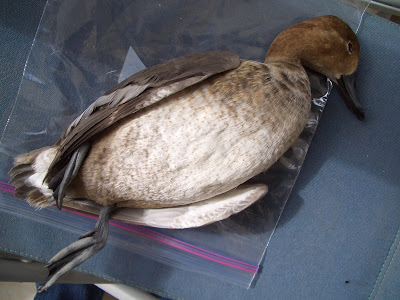 However, on water and under it they are in their element. 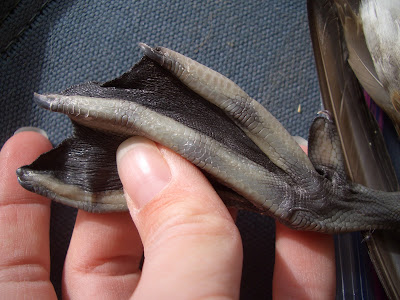 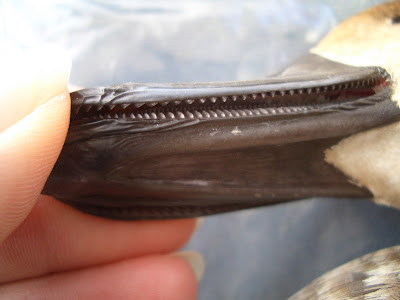 Check out that serrated bill. They have to be able to hold on to their prey item. 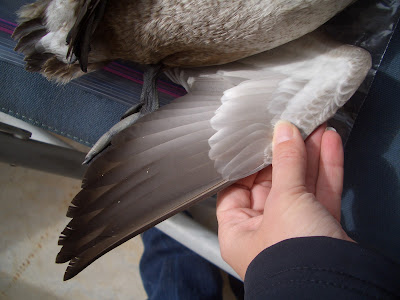 Not really sporting a speculum/wing patch, they do have an extensive gray wing stripe on the upperside of each wing. 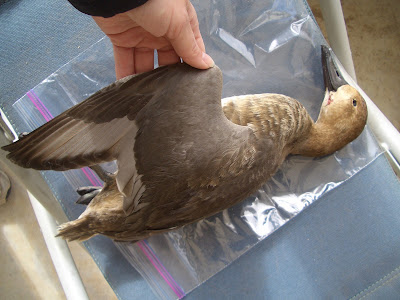 We certainly haven't salvaged any ducks out here before. There's a first for everything.

Edit - Q&A session:
For folks curious about the different sorts of dead bird findings, here are some of the commonly used terms and what they mean in the context of our freezer.

Collect/collected - a collection permit means one actively seeks and shoots/traps/kills for the purpose of study. If we 'collect' a bird, it's inadvertent and because our moving vehicle did the job for us - we do brake for birds, but sometimes 'collecting' in that context does happen. It really doesn't count as such, however, because it ends up as... salvage.

Salvage - it's already dead, but we'll do the best we can to make it useful for study. This is how we come upon 99.9% of our dead things. We find them already dead - by car, cat, window, emaciation and power line (in order of frequency for Brewster County so far).

Scavenge - this is what other animals do. A 'scavenger hunt' for people involves finding things intentionally; a scavenger is a creature that happens upon a delicious morsel that is already dead and 'scavenged' is the condition that you'd call a pile of feathers. Not enough left to salvage, generally.

To recap: Shooting a bird for study is collecting. Picking up a bird that was hit by a car is salvage. A pile of feathers below a window indicates that the bird was scavenged.

Email ThisBlogThis!Share to TwitterShare to FacebookShare to Pinterest
Labels: birds, Brewster County, Marathon, Q and A