This post is backdated to include photos taken by Ellen Baker -

Dec. 10th is the date that one American Crow was heard on the north side of Marathon in the early morning - two were found in a tree being alternately mobbed by Brewer's Blackbirds (see bottom photo) and a Northern Mockingbird. After nearly a week of constant presence, the birds were finally photographed. They didn't remain in the area much longer than two weeks. Photos show a clearly smaller-than-raven beak, round head and reasonable size.

For the curious over the fuss, American Crows are an irruptive species in West Texas... far West Texas. 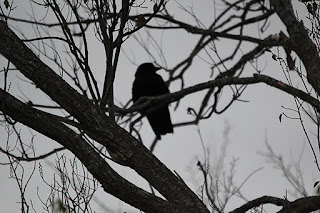 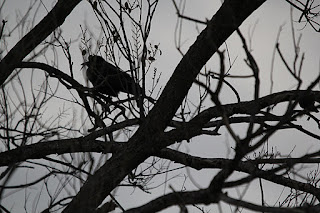 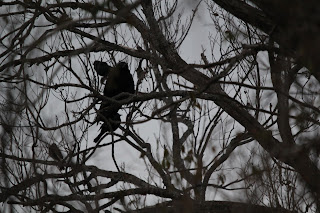 Range map via sdakotabirds.com - a good bit more accurate than some of the alternatives. The map shows the winter range extension, but nothing anywhere near Marathon. And that is why documentation so far out here is interesting!