"Marathon Prairie Dog Town" is located on Hwy 385 almost exactly 10 miles north of Hwy 90. (It's a hotspot on the ebird map, but there are no signs, no tables, no benches, no markers, just some big rocks and pulloffs on either side of the road... and prairie dog mounds... please be nice to ranchers, law enforcement, border patrol and anyone else who is concerned that you are on the side of the road! We look out for each other out here.)

Not to get anyone too excited: here's a Chestnut-collared Longspur. Rambly commentary, location clarification and details below the ebird list! 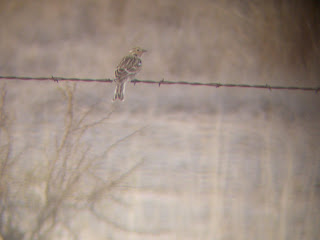 * The male was a non-breeding male, the other... was not. Great looks at dark, uninterrupted auricular patches, rufous wing coverts and nice comparison next to the Chestnut-collared.

Now that we have had our only two Lapland Longspurs for the county (and state) as "dead on arrival" sightings (1 - cat) (2 - car), I opted to push my luck and check the prairie dog town north of Marathon for others. I arrived at about 3:45 and pulled up to find a lovely Ferruginous Hawk escorting a Golden Eagle away from the area. I watched the Golden Eagle head SW for a while and upon returning to the FEHA... it was gone. A scan turned up some distant lumps to the NW but I didn't think much of it (after Matt arrived at 4:45, we did relocate the lumps and determine them to be two Ferruginous Hawks after better looks).

Repeated scans in all directions were rather depressing - not even the prairie dogs were out (not that I blame them, with raptors around!) so I opted to drive a bit north of the prairie dog observation area (1/2 mile) to where the grass was taller and a nice shade of yellowy-orange and I could pretend that I'd kick up a LeConte's... I miss those grasses. Before I'd even made it to the bend in the road, a small Vesper-ish critter flushed from the shoulder and didn't go very far. So I parked at a handy gate nearby (the Kincaid folks are quite pleasant, please don't block their gate and as always, do not trespass on private property!) and walked back down the shoulder to see what critter I'd flushed. Chestnut-collared Longspur. Expected, but always a joy to see up close and alive. Very buffy in the face, but very cooperative for a few digi-bin photos (that didn't turn out too well). Excited to find any longspur at this point, I went back to the jeep to check my phone for reception (the prairie dog town doesn't have cell reception). I'm sure the one vehicle that passed thought I had lost it, standing on the door to get any signal at all... but in the process I noticed movement on the other side of the fence.

Two small lumps were obscured behind some grass, but the auricular patch on one head that I could see... was promising. As the bird emerged, a black breast smudge and rusty wing patches became visible. The bird next to it didn't ever show its front, but the wing patch and uninterrupted auricular outline were also decidedly Lapland. Moving Lapland. 3D Lapland. No zip-lock required!

Eventually Matt escaped work and was able to join me for another leisurely observation of the non-breeding male Lapland with the original Chestnut-collared nearby. We didn't refind the other Lapland, but were focused more on covering additional territory (finding the Horned Lark, Merlin, etc) and ran out of light. A smattering of Chestnut-collareds flew over and some distant 'flocks' of passerines were seen, but overall numbers were very low.

For folks heading to/from Big Bend National Park or Carolyn Ohl-Johnson's Violet-crowned Hummingbird, the prairie dog town is definitely worth a scan! Burrowing Owls in the summer and longspurs in the winter... and whatever raptors find prairie dogs delicious.
Posted by heidi