The Gage Gardens is around 30 acres in size, south of the RR tracks from the Gage Hotel here in Marathon. The Gage is working on this plot of land to attract birds and birders alike.

I needed to survey the place for avifauna this morning, and the place did not disappoint. Forty identified species! In late-December, even. Post Park would envy that this time of yr. The power of these two places combined make little ol' Marathon a great place to enjoy the birds.

Back to Gage Gardens this morning...

When I first got there, I spotted a roosting Wilson's Snipe (Gallinago delicata). 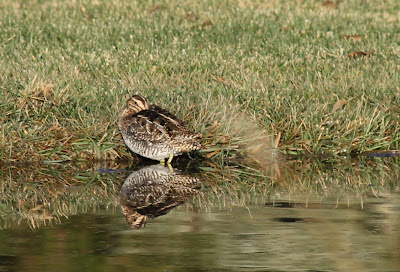 Throughout the rest of the morning it was quickly apparent that there was a pair of snipes. With moist ground in many places thanks to the watering, that pair was seen several times. 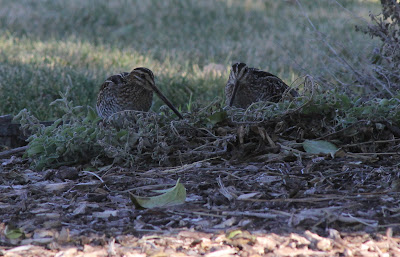 Though, often in the shadows.

It really was Sparrow Day at the ballpark, scores of expected winter-resident species; two less than commonly expected.

The highlight this morning is a species I recall in the winters of Central TX. In the tran-Pecos, however, they are a rare bird. 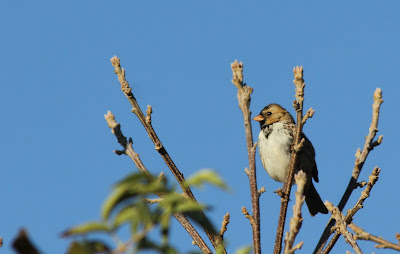 Not always seen in its normal, and narrow, range; this guy was a real treat to observe. They are a big sparrow, over 7 inches in length. 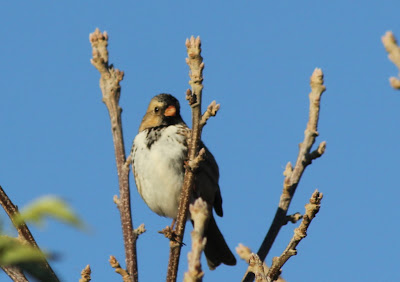 There were many sparrow species feeding under hanging seed feeders. Scratching around the mulch, seed, and leaf-litter. The Harris's Sparrow was generally on the ground scratching away, too. I just happened to photo him in the crown of this tree after an alarm call vocalization came and birds scattered momentarily. 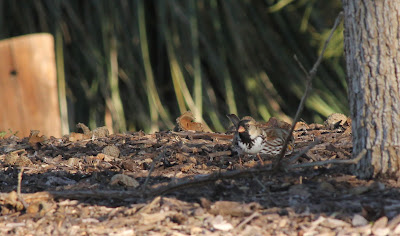 Harris's Sparrow, look behind it. 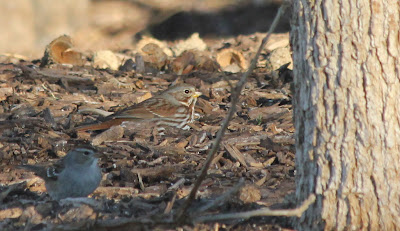 An uncommon species in far-West TX. There is a complex of geographical-color phases. I don't have time to get into it. It would be a nice thing to look up. Anyways, the last Fox Sparrow I remember seeing was on San Clemente Island, CA. That bird looked very little like the above. Pacific coastal Fox Sparrows are generally dark and sooty in color.

Anyhow, the two of them didn't get along. Both big sparrows; the Harris's generally won out on foraging square-inches. 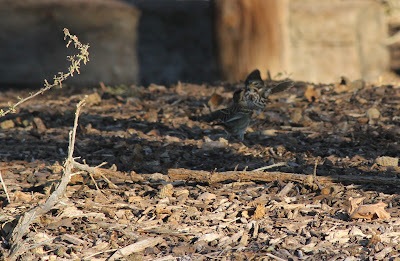 It was a great interaction to observe.

Also around the Gage Gardens were Lark Buntings (Calamospiza melanocorys). They come in the thousands in the Marathon Basin winter. 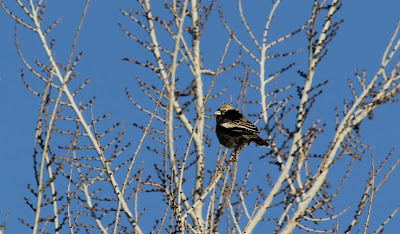 Vermilion Flycatchers (Pyrocephalus rubinus) are numerous in the summers in Marathon. However, they generally migrate down to the Rio Grande in south Brewster County in the winters.

This young male is cutting it close: 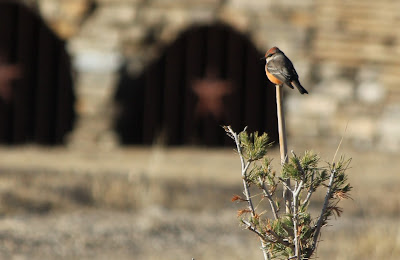 I saw an adult female, too. Maybe there's something to that.

What a beautiful day.... this weekend is supposed to get cold. Great day in Marathon and the Gage Gardens!