A bit of novelty

Today was a nice departure from the routine. A corn-caching Golden-fronted Woodpecker amused folks who were fishing, a few FOS birds were noted, and an interesting Audubon's Yellow-rumped Warbler provided food for thought. Notable by their absence were White-crowned Sparrows and Lark Buntings, both of which are still lingering in Marathon, mostly at/around feeders. Say's Phoebe was also an unusual miss, but an abundance of people fishing and cold, gusty wind may have had something to do with the lower numbers. 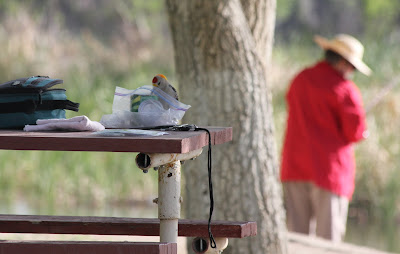 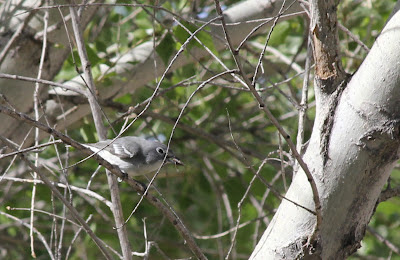 A lovely follow-up to Matt's Cassin's Vireo post: FOS Plumbeous Vireo. If the picture is blown up enough, there's a bit of bug guts visibly smeared on the breast. A bit of an assumption, but a delicious one. The snack appears to be a leaf-footed bug of some sort. 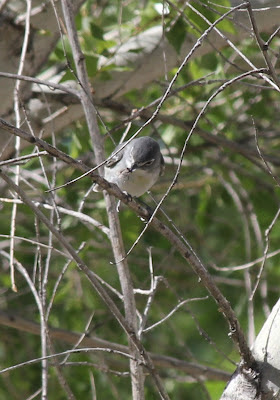 Now something to ponder - the tail of an adult male Audubon's Yellow-rumped Warbler. Generally, from below, they look like this: 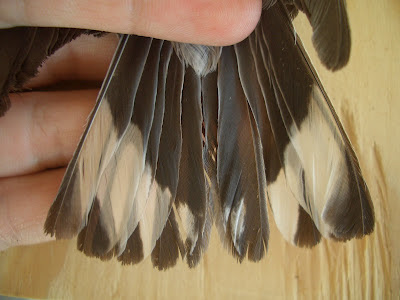 Above is a roadkilled adult male Audubon's Yellow-rumped Warbler from May 2011. Below is the bird in question from Post Park . It appears that both in feather count and in pattern, the bird below has exactly one-half of a tail. The slight notch on the left side should be the center of the slightly forked tail. Still a handsome fellow, but curious. 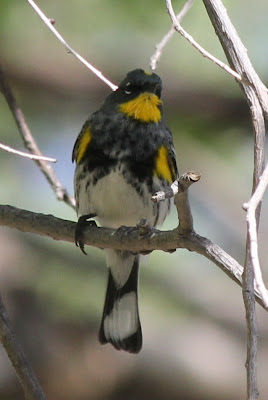