In most of our adventures, we see 'normal' birds. It does stand to reason, however, that the more you get out, the more strange stuff you see. Today was the day for a dark morph Swainson's Hawk, just a fraction of a mile outside of Post Park. 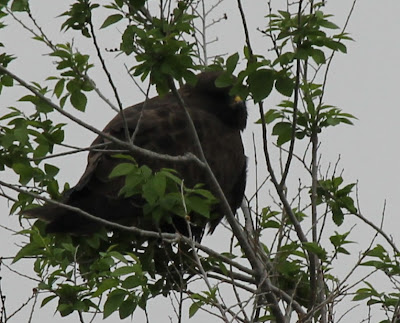 Our first view of the bird, thanks to the overcast sky, was a dark lump. The yellow 'cere' around the beak, however, meant that it was either Common Black Hawk, Zone-tailed Hawk, or a dark morph of the Red-tailed, Rough-legged, Ferruginous or... nah, dark Swainson's Hawks don't exist. But it's not Ferruginous due to size - it's nowhere near the massive bulk of a Ferrug. 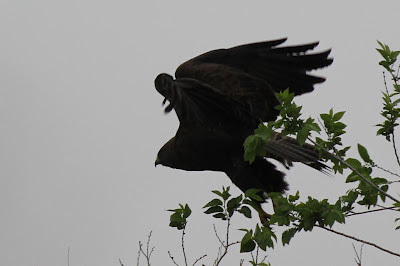 There's the top of the tail - enough fine barring and uniform color to rule out Zone-tailed and Common Black. The bird is not dainty enough for Rough-legged and from this angle we can see that it is indeed, not Rough-legged. 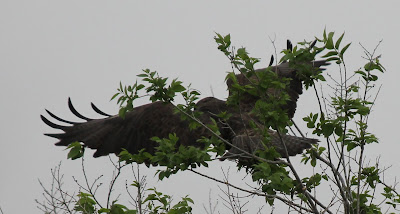 Even a dark morph Red-tail should have a different tail color by now, at least more contrasty than this... but it's the next angle that won't win any awards, but at least adds a significant field mark to the list of things seen on a dark morph Swainson's... 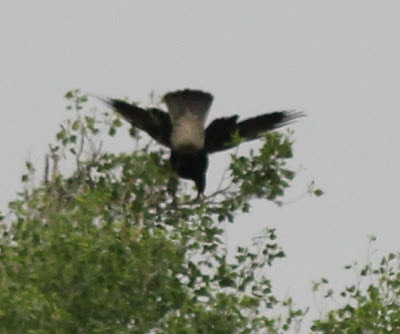 Yep. That view, right there.

According to Sibley (Western, oddly enough not mentioned in Big Sibley), "Dark morph uncommon; only about 10 percent of population." And a line later, "Even darkest birds have light under-tail coverts." Voila. Yet, for the sake of discussion, it would be fantastic to hear from those more fluent in dark morph raptors - especially Swainson's. This was a first for us, and quite an adventure!