The biggest moth of this post is perhaps an inch wide.

All of these were on the north wall, lured in by our porch light and secondary blacklight. Good company, these moths. Also good company, a few herpers - reptile/amphibian enthusiasts. "Mothers" would be catchy, but some of us have no children. Moth-ers, perhaps.

Dates reflect when the light was turned on; most of these are dated 19 June, but some showed up after midnight. For this post's purposes, that's still 19 June.

On to the eye candy!

Tripudia balteata - 2 June 2012
A richly patterned tic-tac of a moth. All the better for pollination. (Link is to a bugguide page with a photo Matt submitted a few years ago!) 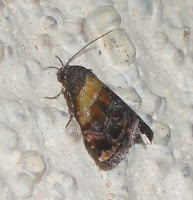 Tripudia luxuriosa - 19 June 2012
A velvety looking creature, this individual shows a bolder cream line across the mid-wing than we normally see. Generally we see two heart-shaped pale dots and that's about it.

According to bugguide.net: luxur-i meaning extravagance, splendor and os-a meaning full of
...being full of extravagance and splendor is a lot for a tiny moth to live up to! 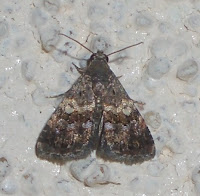 Pyrausta volupialis - 19 June 2012
Volupial = pleasant, in Latin. Pink and white and squiggly all over. Pleasantly so, perhaps. First, with wings closed. 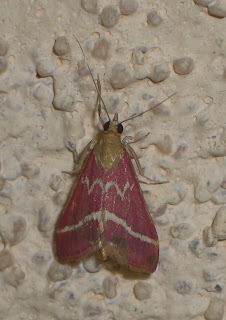 Now, P. volupialis (also from 19 June 2012), but a different individual with wings spread just a little bit... note the difference in the lower line; the critter above has a very smoothly arched line, the one below is a bit jagged in spots. 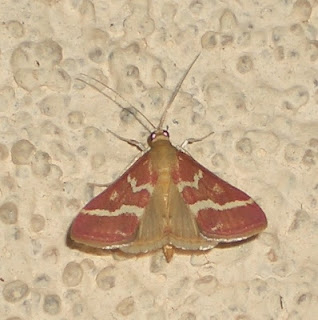 Pyrausta inornatalis - Southern Pink Moth - 19 June 2012
Inornate, the name says. Yet, bubblegum pink. Most of the Pyrausta are listed as having mint as host plants, but caterpillars don't seem to be well documented. 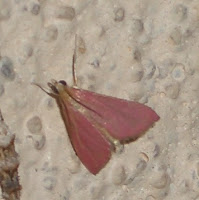 Palpita quadristigmalis - 19 June 2012
Elegant structure for a moth, translucent wings with merely opaque edges and a hint of gold along the leading edge. It's hard to not look at these as works of art. Fluttery, glossy art. 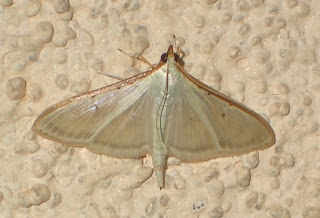 Earlier in the season, two or three would be at the lights at any given time. Lately, the numbers have increased. The little green creatures are lacewings, also increasing in number as the season continues. 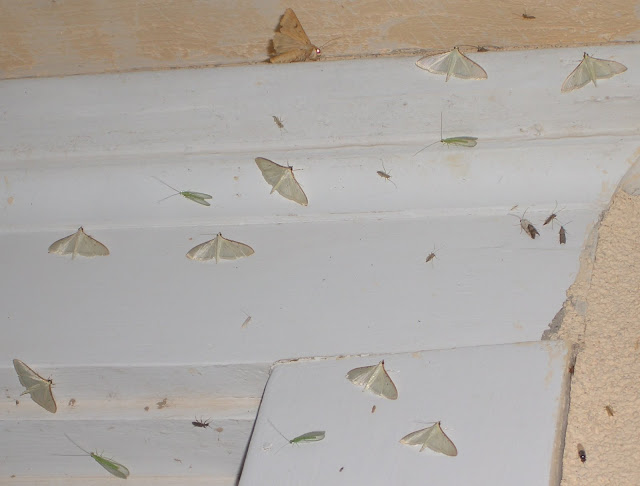