Tadpoles, beware! The snake most seen* in Brewster County (by us since July) is the Checkered Garter Snake (thanks to Joe for ID correction!)... and if you're among "fish, frogs, toads, tadpoles, worms, salamanders" etc, you're likely to be prey! 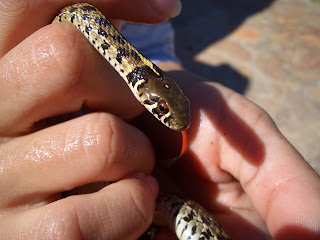 This dear little creature was found on October 28th among a tangle of sprinkler control wires in a subterranean cylinder, under a nice little green hatch. Alas, the sprinkler's main control valve was not down there, but the snake sure caused some excitement! Having never handled this species before, I wasn't sure how thrashy it would be (didn't want either of us to get zapped by the wires), but the assumption that it would behave similarly to other small, non-venomous snakes was correct. 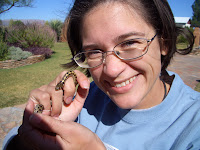 No, it did not try to bite. It simply tried to get away from me, 'musking' all the while. So my hands reeked of snake excement for a while, but the photo-op with the red tongue was completely worth it! For a snake that was barely over one foot long, it sure was smelly.

USE CAUTION AND COMMON SENSE! BE SURE TO POSITIVELY IDENTIFY ANY SNAKE BEFORE ATTEMPTING TO HANDLE IT.
Posted by See Trail