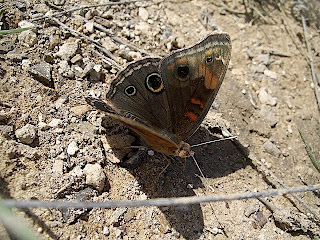 This picture was of an individual back in mid-July on private property east of Marathon.

The Junonia evarete nigrosuffusa seen this morning was far darker than the individual in this picture. So dark, that only the pale forewing band showed in flight yet even that was mostly obscured. 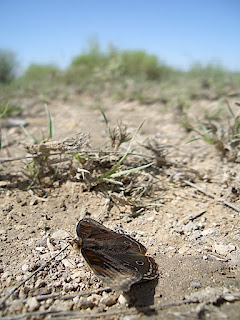 Perhaps it will land later in the day, or tomorrow, so we might have a chance of a photo. Junonia species seem to be very skittish when I approach. Heidi seems to have better luck than I in the past.

Butterflies in October in the trans-Pecos of the state (of mind) of far-west Texas, hard to beat it.

Come on out and enjoy it all.

Both photos taken by Heidi back in mid-July 2010 on private land, here in the basin, east of town.
Posted by MWYork