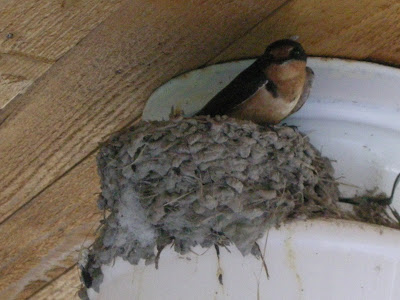 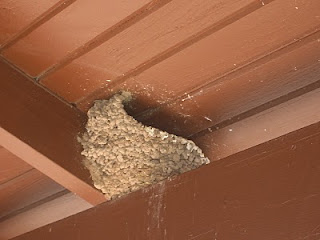 (photo taken at the Marathon Motel, by Heidi Trudell)

As you can see, the classic Barn Swallow cup shape is obscured by little globs of dried mud that do not have bits of grass or feathers. In the photo below, you can clearly see the Cave Swallow mud globs have been added to a mud-and-straw base, essentially adding a new layer to the nest and converting it from a Barn to a Cave Swallow structure. 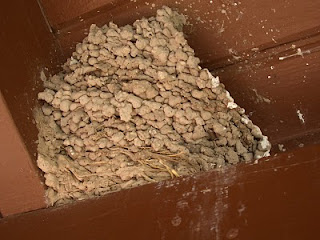 In my haste, when I first saw the nest, I assumed that it was a Cliff Swallow nest that had an incomplete nest hole. Thanks to Mitch from Utopia for pointing out that the description was far more Cave than incomplete Cliff!

For reference, here are Cliff Swallow nests (on an actual cliff!) ...see how gourd-shaped they are? So Cave Swallow nests do look like Cliffs that are under construction, but I should have noticed that the nest had been completed. 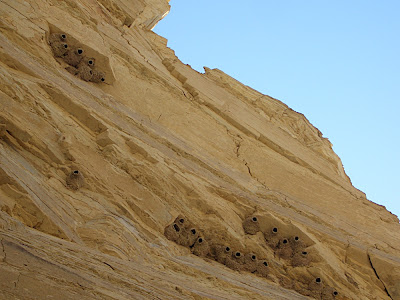 Some discussion from Joe Kennedy regarding swallow nest use:

When Cave Swallows first nested on the [Upper Texas Coast], they picked the old boat shed at McFaddin Refuge which they used to store the boats used on the "see an alligator" tours. Barn, Cave, and Cliff Swallows shared the space under the eaves and in the boat shed for nests. There was lots of nest stealing and birds ended up in the wrong places. Some were inside over the water or docks but many were outside like on any building. No other Caves for more than 100 or 200 miles. [Cave Swallows were rare on the Upper Texas Coast in the late 90's, they now nest annually in good numbers. -h]

Barns arrived first and grabbed the best spots which were often old nests of other birds, then Cliffs and finally Caves. Caves would take over both Barn and Cliff nests and finish them and would even go into full Cave domes. [Barn Swallow nests are always 'cups' and never reach a 'dome' state like Cliff and Cave. -h]

This spring I had no Caves but Tree Swallows were going into old Cliff Swallow nests.

...so nest 'stealing' is not uncommon; it may be important for Cave Swallow expansion!

And a note from Dr. Keith Arnold:

I characterisize the three swallows as this: Cliff - highly social; Cave - semi-social; and Barn - more-or-less solitary [and yes, I know that more than one pair of Barn Swallows will use the same culvert or overpass]. Cave Swallows usually are found in small groups, with nests placed 4-6 feet apart.

The Cave Swallow nest at the motel was sharing a porch with two Barn Swallow nests; it falls perfectly into Dr. A's assessment of nest placement and social structure.

[entry is backdated]
Posted by heidi