Mmmm, tuna juice. No, seriously, the fruit of the prickly pear is called a tuna. Nopal is the green pad. So juicing a tuna isn't nearly as bizarre as it sounds... but it does confuse people when you talk about going around town picking tunas to juice. Especially when you live in pretty much a desert! 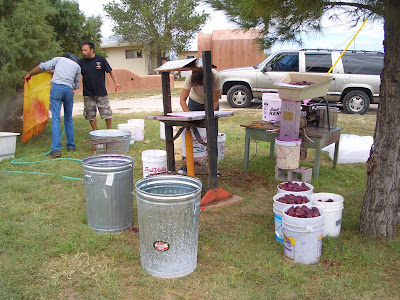 The juicing setup: buckets of tunas, a huge rinsing tub, a chopper/grinder thing, bucket for juice, press, screen, clean containers. You can see where this is going, right? 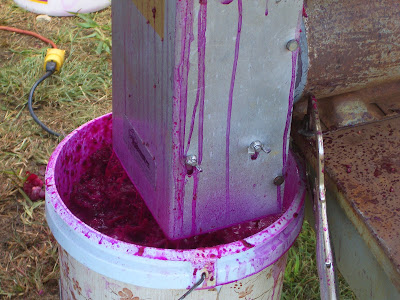 Tuna puree! Of course, since I ended up helping after snapping these photos (and I wasn't thinking about it during the 2 weeks we sipped upon a small fraction of the harvest), this is all the evidence I've got for the juicing of the tunas. Most of the juice was frozen, to later be turned into margaritas and wine, but what was consumed fresh was also consumed with care - apparently it has enough antioxidants to mess you up if you drink more than 1/2 a cup or so per day. Just sayin' (one of the guys there ended up drinking about 3 cups and Did Not Feel Well). Oh, and it is like magenta henna if it gets on your skin. Not to mention clothing!

Exciting factoid: cochineal yields an identical magenta dye. You are what you eat, no?

While on the topic of pink things: 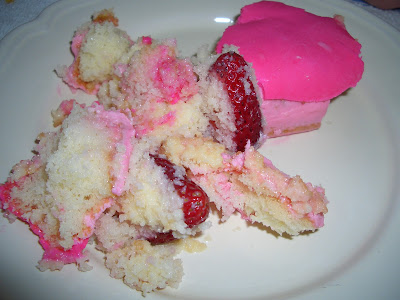 Strawberry Tres Leches - does not transport well. Tastes like heaven. Except for the crazy pink stuff on top, that was concentrated sugar with sugar extract and more sugar. And maybe a funky strawberry flavor additive. But overall, we felt good knowing that our purchase for the bake sale would help fund prom for Marathon High. Rumor has it the graduating class this year is four.

(This post's photos were taken around September 3rd)
Posted by heidi