"Weed cloth," as it is commonly known, is an unassuming hazard for birds. It was one that we never particularly paid much attention to, as it is generally used in commercial operations - but this merits another look. Our side blog, SeeTrail has fairly extensive information on window collisions, though many of the 'window' posts merely include strong reflections in windows on our travels. Windows are one hazard that pretty much every household in the US have in common. Weed cloth? Far less so.

On a recent jaunt, a meadowlark under a bird feeder was noticed to be acting abnormally - while they do crouch and hold still for camouflage purposes, not flying away when approached is problematic. Getting closer, the bird began thrashing wildly and was noted to be tangled in the fraying edges of weed cloth. There had been mulch over the cloth, but birds beneath the feeder had scratched it all away in pursuit of fallen seeds. 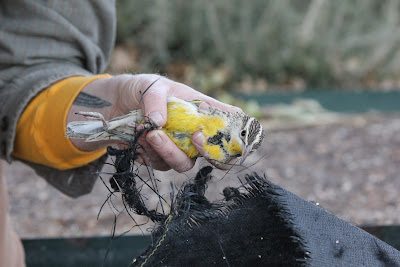 Gentle handling is critical for birds, so the first step was calming the bird - dropping a hat over it caused it to settle down. In the darkness it was not thrashing, risking leg dislocation and further injury. After removing the meadowlark from under the hat, toes were carefully untangled, the frayed cloth was cut free and the bird was inspected for damage. Thankfully it had not been tangled long and there were no cuts or broken bones noted. 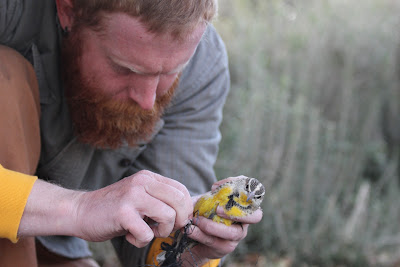 It was released immediately, as it was in good shape. Some good outcomes are recorded from birds that end up with wildlife rehabilitators, but most times the best ones are the ones who never needed to go. 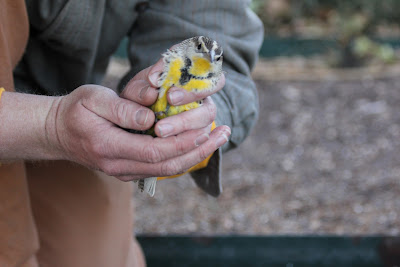 *** It should be noted that the fellow in the photographs has extracted many birds from many mist nets and if anyone finds a bird in a similar situation, a box over the bird to calm it is the best first step. Especially if it is an owl, hawk, heron or other bird that could seriously harm a person, call in someone with experience ASAP - like a wildlife rehabilitator (animal control is better for mammals). As is true of most directories, things change, so call multiple people if the first number doesn't answer. Even if they're not nearby, many rehabbers can give you advice based on the situation you describe to them.
Posted by MWYork