One among the Ferruginous beings.

fer·ru·gi·nous
adj.
1. Of, containing, or similar to iron.
2. Having the color of iron rust; reddish-brown.

Ten miles north of Marathon, on north HWY 385, is part of a plateau grassland we refer to as Prairie Dog Town. There is no historical marker or bronze statue of digging-mammals. There is however a fairly conspicuous turn-out on either side of the highway. You'll see it. Reset your trip odometer here in Marathon/Paradise City and as it nearly hits 10 miles, you're golden.

In summer there are better chances at viewing Burrowing Owls (Athene cunicularia). We'll meet that in several months.

In the winter this high-elevation grassland plain is generally teaming with longspurs Family Calcariidae. Particularly the Chestnut-collared Longspurs (Calcarius ornatus) and McCown's Longspurs (Rhynchophanes mccownii) species. We've even found, thanks to Heidi, a few Lapland Longspurs (Calcarius lapponicus). Find a Smith's (C. pictus) and I'll buy you a beer. All these are generally experienced as low fly-overs. Though one can find then darting among the mazes within the bunchgrasses; that, difficult on somedays.

One of my favorite North American raptor species calls this area, and similar habitat described, home during the winter months.

Certainly something to give alert to the prairie dogs. 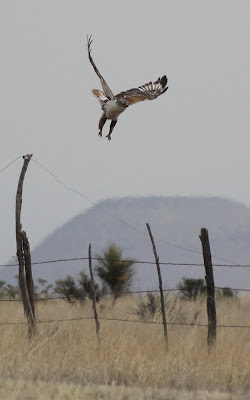 One often encounters this magnificent species perched on a fence post, like the individual above has just vacated. However, most of the time they are actually perched on the ground. 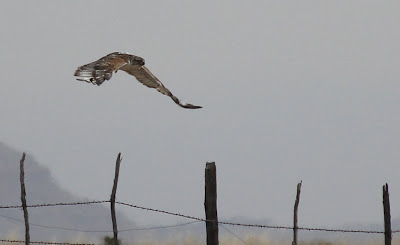 Also, look for this large hawk (it does have a 56 inch wingspan, our largest hawk) flying no more than a few feet off the ground. 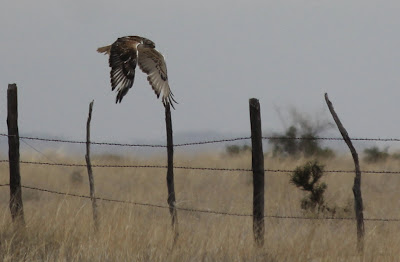 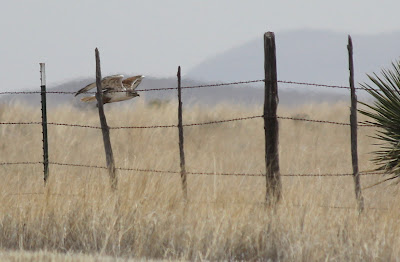 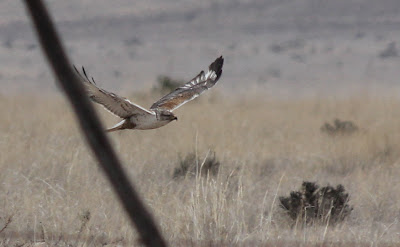 Ferruginous....
They sport rusty "shoulders" and "backs" above and generally dark-rusty leg feathering. Their tail is
usually a mixture of white and pale rust. 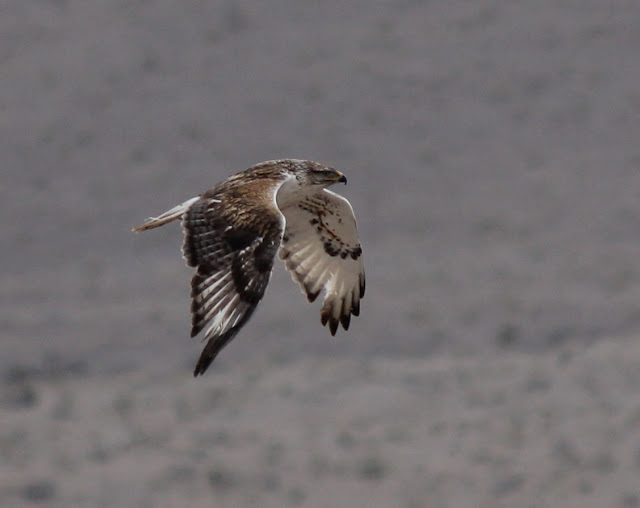 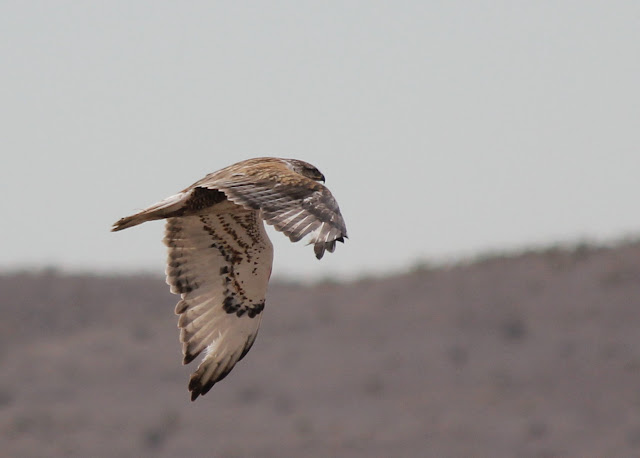 As mentioned before you are mostly going to find these birds flying low over the grassland as is the behaviour of this species. 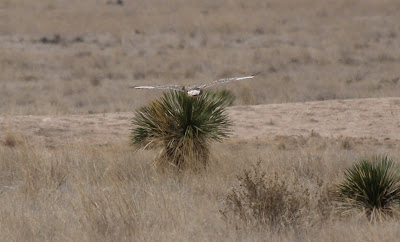 Also, as mentioned, when you find North America's largest hawk species perched; most of the time, it will be on the ground. 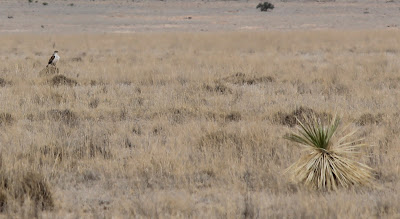 Double-check those white plastic bags snagged in the field out there, if there are any. Pretty much snow-white up front, this Ferruginous of Hawks.

Should you see me in the field, you'll come to know why I take a fondness to the ferrugionous folks of the Animal Kingdom.

Caveat: Yesterday, while enjoying the many grassland species of the "Prairie Dog Town" viscinity, a Whimbrel flew by me.

Remember the previous day. Nearly constant 30-40 mph winds generally from the WNW. Ask Central and North TX, they were eating our dust.

Birdwatchers often are weather watchers too. An all day wind event just might blow in a shorebird to a high-desert grassland. Don't bother looking for it at Prairie Dog Town now. I never saw the bird land, though it flew fairly low.
Posted by MWYork