Where it matters relates to the previous blog post of knocking out each Texas Target species for a birding friend/client/guest/customer/friend these last couple of days.

During the initial contact, when that species was brought up, I explained to him that Townsend Solitaire has been scarce-to-zero for us so far this Winter Season.   We aren't going to be misleading just to get any person out here.  We tell the truth of what's going on, prospects, potential successes, and so forth; even when we wish it weren't so.

While in transit from Reeves County back to Brewster County, I received a call from Heidi. She had just gotten her state Townsend's Solitaire on a friend's property.

This was the truth yesterday afternoon, the 23rd: 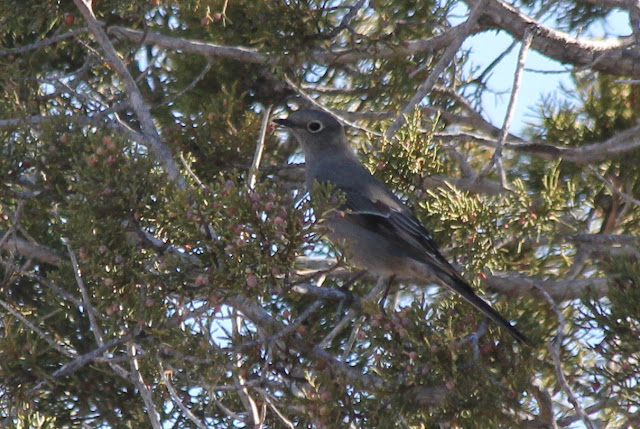 I actually took these photos at that location today, 24 January 2013, because I "needed" them for Brewster County.

Still three.
Still foraging on juniper berries and fly-catching insects.
Still mumbling to themselves and each other.

Way to come through, Heidi!  Muchas gracias to the property owner!
A nice little surprise to slip in at trip's end for the visiting birder.

As always, thanks to the birds.  It is, after all, at some point each and every time up to them.